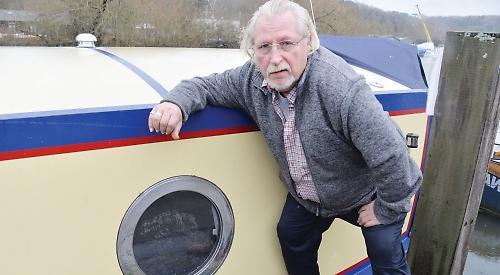 THE owner of a houseboat that was vandalised has condemned those responsible.

James Murphy, 72, is angry after two windows on his Dutch-style barge La Bouverie were damaged as the vessel was moored on the river near Mill Meadows in Henley.

The windows, in the main bedroom and bathroom, were repeatedly kicked, so the aluminium frames and the locks broke.

Mr Murphy, a retired graphic designer, said: “One doesn’t expect these things to happen in Henley. I find it incomprehensible.

“When I was their age you never thought of doing anything like that, you had respect for other people’s things.”

The incident happened at about 5pm on December 5. Three windows on a narrowboat moored nearby were also smashed, as the Henley Standard reported last week.

Four men who were seenin the area at the time are thought to have been responsible.

Mr Murphy said: “I’d just got into my dressing gown to have a shower and heard this dreadful commotion.

“I came back into the lounge and heard these violent kicks.

It was so loud I thought initially it was someone running over the roof.

“They kicked in both my front windows. They must have kicked each one about six times.

“Fortunately, they both have laminated glass so they didn’t smash but the internal frames and locking devices were damaged.

“They wanted to smash them but because the glass wouldn’t break they kept on kicking until they caved in.”

Mr Murphy, whose 70ft boat has been moored in Henley for about three weeks, said: “One doesn’t normally get this type of vandalism on boats — this is wanton destruction, which is crazy.

“[The vandals] should be castrated in order to stop them from breeding, in my opinion.”

The incident has not soured his opinion of Henley, however.

Mr Murphy said: “It’s just one of those unfortunate things. Wherever one goes one runs the risk of meeting some scoundrels.

“It would be a sad day if I was to say ‘sorry, Henley is the dumping ground of Britain’ because it’s not. Henley is a wonderful place and I have splendid views here.”

The other boat that was damaged belongs to Nicola Pitt, who lives in Henley.

Her partner Andrew Selden said: “Two of the windows were smashed and the third one was knocked in and forced out so the frame’s damaged as well.

The moorings are owned by Henley Town Council and are run by boat hire firm Hobbs of Henley.