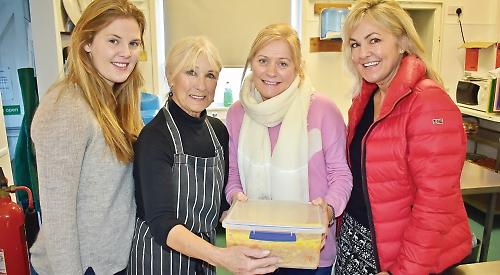 THREE friends donated a batch of home-made soup to Henley’s 60+ Club as a Christmas present.

They used ingredients donated by Waitrose and followed a recipe provided by Greg Lewis, head chef at the Spoon café and delicatessen in Duke Street.

Mrs O’Leary, an author, was inspired by the “soup sisters and broth brothers” initiative in her native Canada, in which groups of friends cook soup for community causes.

She decided to support the club after reading in the Henley Standard about the funding shortfall it was facing at the start of this year.

The trio intend to make soup for local groups on a regular basis.

Mrs O’Leary said: “It’s a hugely popular idea and I thought it would work well over here. We had a lot of fun getting together and making the soup while sharing a bottle of champagne.

“It’s a really comforting, nourishing gift and something that supports people in a tangible way.”

Connie Butt, who manages the club, said: “It’s an extremely generous gesture and we're extremely grateful. We were going to have beef stew at our next meeting but instead I’ll serve this with some French bread and I’m sure it will be absolutely lovely.”