From petrol station to care housing 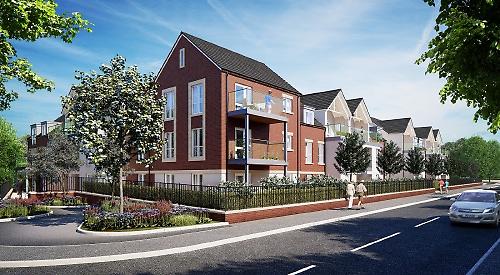 THIS is the first glimpse of a controversial “extra care” complex in Henley.

Albert Court, which will consist of 54 flats for elderly and disabled people, is currently being built at the former Jet garage site in Reading Road.

McCarthy & Stone, a retirement developer, was granted planning permission last year despite the site being earmarked for 55 ordinary flats, including 22 affordable ones, in the joint Henley and Harpsden neighbourhood plan.

This led to protests by town councillors and claims that Henley was becoming “the Eastbourne of the Chilterns”.

The first residents are expected to move into Albert Court over the summer. The flats will have either one or two bedrooms and the communal facilities will include a club lounge and bistro-style restaurant, landscaped gardens and a guest suite for visitors to stay.

The development will have its own estate management team on-site 24 hours a day, along with a security entrance system and
24-hour emergency call points.

Georgina Akers, regional sales and marketing director for McCarthy & Stone South-East, said: “We have already received a significant level of interest in Albert Court thanks to its picturesque setting and enviable location.

“We want to be able to find people the right solution for their retirement, a solution which will suit their changing requirements in later life.

“We are also committed to delivering the right development for the needs of the area.”

Planning officers had recommended approval, saying the neighbourhood plan made no specific recommendations about how the land should be used.

The then mayor Julian Brookes said: “More than 80 per cent of Henley residents voted for the neighbourhood plan and the town council’s unanimous view is that this should be adhered to.

“The biggest challenge our residents have is to find somewhere affordable in the Henley area.”

Councillor Joan Bland, a member of the committee, who was forbidden from voting because of her links to the town, said: “The last thing we want Henley to become is a ghetto for old people and a gateway to heaven.”

Councillor David Nimmo Smith, who was not allowed to vote because he was then chairman of the town council’s planning committee, spoke out after the meeting.

He said: “The decision is a body blow for Henley. So much for our neighbourhood plan — coach and horses driven through it.”

Henley MP John Howell urged the Government to intervene, saying the committee’s decision was against residents’ wishes. In a letter to then planning minister Gavin Barwell, he said: “There are no specific policies regarding care homes but overall the neighbourhood plan favours affordable housing.”

Mr Barwell declined the request and it is understood that the Department for Communities and Local Government didn’t think the scheme strayed far enough from the plan to justify intervention.

In 2016 the committee also granted permission to Henthames to build an 80-bed, three-storey care home at the former LA Fitness site in Newtown Road, even though the site was not one of the 11 earmarked for housing in the plan.

The land has since been put up for sale without any development work being started.

Meanwhile, B&M Care has been denied planning permission for a 65-bed care home on the site of the former youth centre in Deanfield Avenue, which is earmarked for 23 homes in the plan.