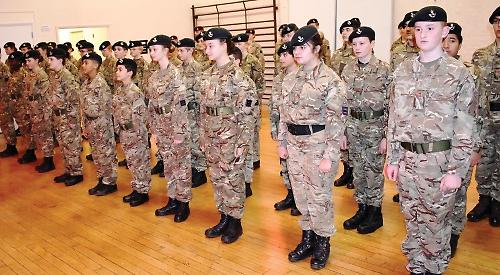 THE cadets have been presented with an award after raising more than £2,400 for the Henley Poppy Appeal.

For the past year, the youngsters have been raising money through street collections and in April they completed a 10-mile sponsored walk at Harwell.

Officials of the Henley and Peppard branch of the Royal British Legion, which organises the appeal, pitted them against the town’s air and sea cadets to see who could raise the most money.

The army cadets came out on top and last week Matthew Case, the group’s company sergeant major, was presented with a trophy by Henley Mayor Kellie Hinton and a certificate by John Green, chairman of the Legion branch.

The cadets were also inspected by Mr Green, the branch’s cadet liaison officer Alex Manning and Major Paul Smyth, second-in-command of the Rifles’ 7th Battalion, who lives in Friday Street, Henley. and whose daughter Jessica, 14, is a lance corporal in the unit.

Following the inspection, the officials chatted with the youngsters as they took part in activities, including first aid, weapons and expedition training and physical exercise.

Mr Manning told the cadets: “Firstly, thank you for your excellent efforts, which have rightly earned you the trophy. Secondly, I am thoroughly impressed by your bearing, turnout and attitude.

“The quality of your responses to my questions shows me you have the belief and confidence in yourselves that this organisation seeks to teach you. You are proud of your unit and yourselves and rightly so.”

The Mayor said: “You are not just the local face of the army cadet force but the face of our community and its youth. I couldn’t be more proud to be here this evening to present this award to you all.”

The Henley army cadets parade at the Drill Hall in Friday Street every Wednesday from 7pm to 9.30pm.

They are currently looking for new cadets and adult volunteers. Feel free to come along and experience something new.