Heart checks for all pupils 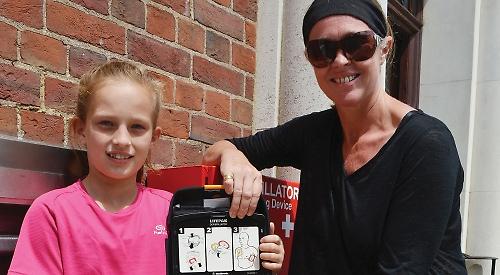 EVERY child in the Henley area is to be offered a free heart screening.

It is the latest initiative by Millie’s Dream, which has installed 55 lifesaving defibrillators in schools and communities throughout the area.

Sarah Roberts, who founded the charity in 2013, plans to work with Cardiac Risk in the Young, a national charity that raises awareness of sudden adult death syndrome in young people and offers subsidised electrocardiogram and echocardiogram screening to people aged 14 to 35.

Miss Roberts, 49, who named her charity after her 10-year-old daughter, who has a heart and lung condition, is to approach the headteachers of the 25 schools where Millie’s Dream defibrillators have been installed, offering the free screenings.

She said: “Cry offers every single school an ECG for every child free of charge. A highly trained professional from the charity goes into the school and it takes two to three minutes to do each scan.

“It wouldn’t be particularly difficult. We already have nurses and all sorts of health professionals going into schools. If something is identified it will be handled appropriately and very sensitively and the family will be encouraged to see their GP with the report.

“We need the schools to take this seriously because of the number of young people who are continuing to die. There are 12 deaths a week from cardiac arrest in young people.

“The people who drop dead are the ones who know nothing about it. It’s not ones like Millie, who know about it.

“There are cardiac arrests that we’re never going to be able to stop but if we can start screening our children, as a lot of the elite sports clubs are now doing, we can pick up some of the heart anomalies.”

Miss Roberts, who lives in King’s Road, Henley, said: “This is a new start for the new year and I am pledging myself 100 per cent to ensuring the original dream of ‘heart safe’ schools.”

Millie, who is a pupil at the Oratory Preparatory School in Goring Heath, was born with tracheobronchial malacia, a disorder of her respiratory system, and was subsequently diagnosed with paroxysmal atrial tachycardia, an electrical malfunction of the heart which can be life-threatening in severe cases.

Miss Roberts, who is a clinical director of physiotherapy clinic Active VIII in West Lane, launched the appeal in September 2013 with the aim of raising £15,000 to pay for Henley’s seven schools to have a defibrillator.

But the response was much greater than she expected and the appeal has now raised £90,000, which has paid for the lifesaving devices to be installed in not only schools but also village halls and other public buildings as well as outside businesses, so they are available to the whole community.

Another four devices are ready to be installed and Miss Roberts wants to raise a further £35,000 to pay for another 41 to take the total to 100.

Miss Roberts said: “Millie’s initial dream was of ‘heart safe’ schools and through the support of the community, schools and the Henley Standard, we have succeeded in that and put the training behind that.

“Now it is a Millie’s Dream pledge to ensure the town and its wider community is serviced by a golden 100 devices.

“These devices are our greatest way of securing the survival of our loved ones, family, friends and colleagues.”

She has identified a number of areas in Henley where a defibrillator is not immediately available, including by the “top shops” in Greys Road, Deanfield Road, the St Mark’s Road/Vicarage Road area, Fair Mile, Luker Avenue area and the towpath near Thames Side.

Other potential locations include Henley Rowing Club and the Eyot Centre, both off Wargrave Road, the Tesco supermarket and Jubilee Park, off Reading Road, and Lower Assendon.

Miss Roberts said: “I want every corner to be protected. To reach that golden 100 to make sure Henley is heart safe is our dream.”

According to the British Heart Foundation, when a person has a cardiac arrest, a defibrillator can be a lifesaver. For every minute that passes without defibrillation, the chances of survival decrease by about 10 per cent.

Miss Roberts also plans to hold a demonstration day in Falaise Square in the spring where paramedics will be on hand to show people how to use the devices.

She said: “There’s no point me donating 100 defibrillators if people don’t know how to use them.

“The more people walking around our communities who are familiar with how to use a defibrillator, the more likely people are to survive.”

She is appealing for people to support the charity or to organise fund-raising events. If you can help, email her at sarah@active-viii.org

To make a donation, send a cheque made out to Millie’s Dream to: Millie’s Dream, the appeal office, 3 West Lane, Henley, RG9 2DZ or visit www.facebook.com/
milliesdreamuk

For more information, call Miss Roberts on 07733 318993 or visit www.milliesdream.org.uk