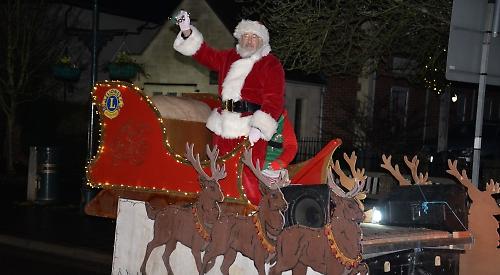 It was in danger of folding after Henley Round Table, which had organised it for more than four decades, folded in September due to dwindling membership.

Mrs Phillips, of St Mark’s Road, decided to step in as her children have fond memories of the sleigh run when they were growing up in the town. Following an appeal in the Henley Standard, a team of 46 volunteer “elves” came forward to carry buckets and collect donations both in the street and door-to-door.

The sleigh visited different parts of Henley and Shiplake on nine evenings in December, typically accompanied by about eight volunteers.

Mr Povey also staged a bucket collection in Henley market place. The opening night, which was due to take place in Greys Road and Greys Hill on December 10, was postponed until December 21 due to snow and ice. The proceeds will go towards the annual Christmas party for children from Bishopswood Special School in Sonning Common at Phyllis Court Club in Henley with some also going to Lions’ charities.

Mrs Phillips, who founded Henley’s Santa fun run when she was mayor in 2011, said: “I would like to thank everybody who made it happen, from our volunteers to everybody who donated.

“It had been going for at least 40 years so when I heard it might not happen I decided to make myself a pain in the backside by taking it on and getting other people to join me! The Henley Standard was very helpful in getting the message out and everyone who got in touch felt, as I did, that it was a Henley tradition we shouldn’t lose.

“The numbers on each night varied and on one occasion we had only six people due to illness but we carried on.

“The fact that people came out and gave considerably more money than usual shows how much support we had.

“Lots of people said they’d thought it was cancelled and they were so pleased to see it carrying on.”