How new play area could look 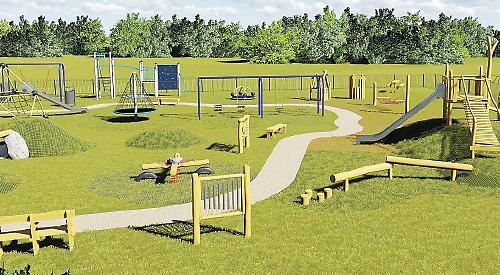 is how the new play area at Makins recreation ground in Henley could look.

Two companies have been shortlisted to refurbish the facility near the new skate spark off Greys Road and install new equipment.

The town council, which is responsible for the recreation ground, wants residents’ views of the firms’ designs before it chooses one.

Councillor Sarah Miller, who chairs the council’s recreation and amenities committee, said: “We have got two really great designs. They are different from each other but both tick the boxes so it’s going to be really difficult to choose.

“We really want the public to get behind this — parents and kids — and to say what they like and dislike because it’s for them. We’re catering for all, including children who have mobility problems.”

She said the play area had needed improving for some time.

Cllr Miller said: “Because it’s not down by the river, it can be forgotten. It just needs refreshing — it’s a great piece of land.

“I want to make sure all of our parks and playgrounds are up-to-date and that the kids are using them and get the best from them.” Wicksteed Playgrounds, of Kettering, suggests having a 25m steel cableway, a 4m “pirate’s lair”, a crusader rope swing, a swirl roundabout and a toddler zone.

Area sales manager Dafydd Williams said: “The vision was to design something for all ages and abilities.

“We have tried to tick all the boxes, from swinging and rocking to spinning and hanging.

“There are numerous things the children can play on rather than spending five or 10 minutes on one piece of equipment and then getting bored. Once you have been on one piece, you can move on to another. The idea of the pirate’s lair is to have some height in the park because the views are stunning.”

The Children’s Playground Company, of Wolverhampton, suggests having wooden equipment including a play tower, climbing net, slide, ladder, balancing beams, a rope for hanging, wobbly bridge, chimes, a picnic table, benches and a hammock. Company founder Rinske Wassenaar said: “I went for this design because the company’s ethos is to promote natural play and environmentally friendly products.

“We have made all the pieces of equipment easily accessible and there’s a footpath connecting them. The site is quite flat so we decided to put in mounding to add additional play value.”

Mrs Wassenaar said the equipment encouraged “integrated” play and was suitable for children of all ages and abilities to play together.

Rubber matting to protect children in the event of a fall would have grass growing through it to make it look natural.

The new play area is part of an improvement plan for the recreation ground that also involves installing an outdoor gym and the new skate park, which opened in August.

Four companies made a bid for the contract to extend and improve the play area. These were whittled down to two after all four made presentations to councillors in September.

The play area designs can be viewed at the town hall and on the council’s website, www.henleytowncouncil.gov.uk

The committee is expected to make a recommendation to the full council at a meeting on January 16.