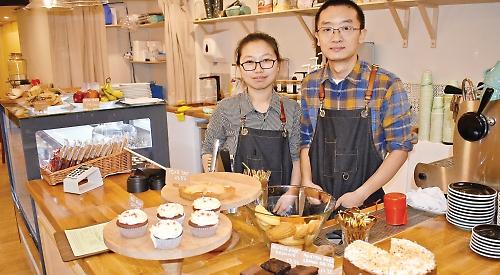 TWO more coffee houses are opening in Henley town centre while an independent shop is to close.

Drifters Coffee House is to move into the former Upstairs & Downstairs tea rooms in Duke Street while Berries opened at the former Jonkers Rare Books premises in Hart Street on Wednesday.

With Harris + Hoole, part of the Caffè Nero chain, due to open at the former Maison Blanc unit on the corner of Hart Street and Duke Street, the number of coffee shops in the town centre will rise to 15.

Town manager Helen Barnett said she was concerned that there would be too many cafés but felt it was better to have units that were in use than empty.

“It’s about trying to work with the agents and get the best mix we can,” she said.

She said some of the other new concept cafés, including Scene 1 Take 1 in Bell Street and Spoon in Duke Street, were doing well.

Berries is run by Lawrence Tian and Lucy Lu, who have signed a five-year lease on the unit and are living in the flat above.

They have spent about £40,000 refurbishing the interior.

Mr Tian, 35, roasts the coffee beans at an industrial unit in Wokingham while his wife, 30, prepares the sandwiches, cakes and other snacks.

The couple grew up in China and met while they were overseas students at the University of Reading. After graduating in accountancy and food science respectively in 2010 they moved back to China and set up a coffee shop in Harbin, capital of the northern province of Heilongjiang.

They decided to move back to the UK as Mr Tian had obtained British citizenship and they wanted to bring up children here.

They chose Henley as they felt it was more upmarket than Reading and there were more premises available.

Mr Tian said: “We will provide great coffee and excellent customer service, which is the most important thing for a business.

“We learned a lot about running a coffee shop while we were in China and really like the idea of running our own business.

“Henley is a nice town, especially in the riverside area, and we are looking to get to know people.”

Meanwhile, Henley Cycles in Reading Road will shut at the end of this month after nine years.

Owner James Miller said reduced footfall and the rise of online retailing had affected the business.

“For me it’s not rent or rates, which everyone seems to think is the main issue,” he said.

Mr Miller, 42, opened the shop in April 2009 after working at a bike shop in Reading and noticing there was no equivalent outlet in Henley, where he lives.

The store offers a range of BMX, mountain, road and children’s bikes as well as accessories and servicing.

Mr Miller said the business had enjoyed a successful few years but then trade dropped off.

“The amount of spend going online has increased,” he said. “I’m not going bust but it has got to the point where I am doing a lot and not getting a huge amount in return.

“2017 was a really hard year and now seems to be the time for me to move on. It’s time for a change.

“I have many loyal and good customers, many of whom I now as friends. I am sorry for them and will miss them. I am grateful to them and thank them for their custom.”

Mr Miller has not set a date for the shop’s closure and is trying to clear the stock.

He said: “All being well I will be out by the end of January.”

Ms Barnett said there had already been some interest in the unit from other businesses.