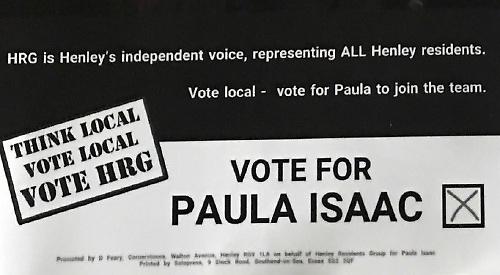 Mayor of Henley says she is disappointed by attempts to sabotage her party’s town council by-election campaign.

The ruling Henley Residents’ Group says it has a photograph of two people removing its leaflets from letterboxes in Elizabeth Road on Saturday.

Mayor Kellie Hinton said she didn’t expect a parish council election to be fought in a “dirty” manner.

“It’s a by-election for one seat,” she said. “The whole thing is unfortunate and disappointing. All we want is a who is going to work hard and that’s what the election should be all about.”

Councillor Sarah Miller, of HRG, wrote on Twitter: “It would seem #HRG leaflets are being removed from letterboxes — thankfully we have photographic evidence.

“This is illegal and should stop right now.”

Councillor Julian Brookes, of the Conservatives on the town council, said tampering with election leaflets was “definitely off-side”.

He added: “It’s strictly against basic democratic principles which Conservatives, and me in particular, will do everything to uphold.”

Residents will head to the polls on Thursday for the by-election caused by the resignation of Conservative Simon Smith.

Paula Isaac, of Henley Residents’ Group, Donna Crook, of the Conservatives, and Jackie Walker, for Labour, are contesting the seat in the Henley .

Polling stations at Henley town hall and Henley leisure centre, off Gillotts Lane, will be open from to and the result is expected to be declared later that night.

HRG will be hoping to tighten its grip on the council after winning two by-elections in May and then back control at mayor-making.

Mrs Isaac, 38, is chairwoman of Gainsborough Residents’ Association, which she founded in September 2013 with David Eggleton, who is an HRG councillor.

She lives in Gainsborough Road with her husband Rob and three children and works as a teaching assistant at Badgemore Primary School.

Mrs Isaac says her priorities are helping to provide more affordable housing in the town and family facilities.

Ms Crook, 43, of Abrahams Road, Henley, says she is part of a move by the Conservatives to increase their appeal.

Her priorities are to improve public transport in Henley and campaign for more police on the streets.

She also wants to help tackle air pollution by reducing the number of cars on the road and to have air quality monitors outside every school.

She has three grown-up children and works as a cleaner as well as running a craft business.

Mrs Walker, 51, is a former civil servant who stood unsuccessfully in the Henley division at the Oxfordshire County Council elections in May.

A mother of one who lives in Middle Assendon, she says her priorities are to tackle the town’s congestion and air pollution problems and to create more social housing for young people and those on low incomes.