Time to salute women at heart of our communities 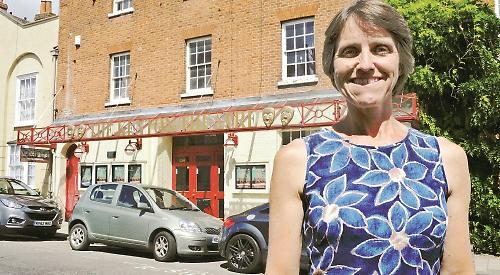 THE Mayor of Henley says she is flattered to have been nominated for a Sue Ryder Southern Women of Achievement award.

KELLIE HINTON is one of 12 women from the Henley area to have been nominated in the community category.

The 32-year-old, who lives in Queen Street with her partner Ben Hinton and their daughter Hallie, seven, said: “I was shocked to hear about the nomination.

“It hadn’t even entered my mind that someone might put me forward and now I’ve seen the list of nominees I feel even more special as there are so many people on it that I admire. It’s wonderful to see my name among them.

“Although there can only be one winner, everyone on that list deserves some form of recognition and it’s an honour just to be shortlisted.

“I’ve had what I hope is a very successful mayoral year and feel what I’ve already achieved was enough so it’s touching to receive this nomination as well.”

Councillor Hinton was elected Mayor in May last year when Henley Residents’ Group regained control of the town council from the Conservatives.

She was elected as a councillor in 2011 and then became involved with Henley in Bloom, eventually taking over as chairwoman.

Since then, the town has won five consecutive gold awards in the Thames and Chilterns regional competition and won the best town category in 2015.

Cllr Hinton grew up in Henley and attended Trinity Primary School and Gillotts School. She spent several years living at the YMCA flats in Lawson Road, where she served as a tenant
representative.

In October she was named best young councillor in Britain by the National Association of Local Councils.

LAURA REINEKE, a professional violinist, has been nominated for her work with the Henley Music School, which she founded in 2010 and became a community interest company in 2015.

It provides music tuition and activities for more than 250 children, more than 70 of whom take part in its Music School Sunday sessions.

It also runs free music clubs in schools, both during the day and as an after-school activity, as well as music taster sessions.

The school offers individual music lessons in any instrument and can lend children instruments until they can afford to purchase their own. It also provides subsidies for children who couldn’t otherwise afford tuition, offering discounts of up to 100 per cent.

Adult musicians can take part in the school’s Henley Youthful Orchestra, which rehearses once a month.

Mrs Reineke, 45, lives in Berkshire Road, Henley, with her husband Antony, who runs the jewellers Studio 35 in Duke Street, and their children Mae, 17, Ava, 14, and Alfie, 12.

She came up with the idea for the school after being asked to teach music when her children were at Trinity primary.

The school costs £50,000 a year to run, which she raises mostly through applying for grants.

Mrs Reineke said: “I’m very flattered and surprised to have been nominated.

“It’s a little bit embarrassing but it’s lovely really as I spend a lot of time working alone at home and it’s good to know that people think I’m doing an okay job.

“I’m pleased to be shortlisted in the community section because the Henley community is very important to me. Running the school is hard work but to be recognised like this is what keeps you going.”

WENDY BOWSHER has been nominated for her 15 years as managing director of the Kenton Theatre in New Street, Henley, until she stepped down in 2016.

The 50-year-old, who has lived in Henley all her life, first volunteered at the venue in 1983, when she was a pupil at Gillotts School.

She was made a trustee in the late Nineties and hired as a paid fund-raising manager in 2001, during which time she raised enough money to renovate the lighting in the main auditorium.

She was made managing director and the theatre’s only paid employee in 2002.

She also raised about £600,000 for improvements through grants, private donations and events.

In 2010 Mrs Bowsher ran the Kenton for Keeps campaign, raising £350,000 in six months so that the trustees could buy the freehold of the building from the Henley Municipal Charities in order to refurbish it.

Mrs Bowsher, who was nominated anonymously, said: “I’m both flattered and humbled.

“It was never just about me at the Kenton — there was a whole team behind me and I could never have done it on my own.

“We achieved so much over that time and I was only one of many people who helped to make it happen and move the theatre on.

“I was giving back to the Henley community, which the Kenton Theatre is an important part of.

“I put so much time and effort into it because I believe it brings together people from all walks of life. It’s a place for everybody and that is how it should remain.”

VICTORIA NEWTON AND JANE MACFARLANE DUCKWORTH have been nominated for organising the Chelsea Fringe Henley festival. The annual event, which began in 2014, is an alternative festival of flowers, gardens and gardening which runs concurrently with the main festival.

Mrs Newton, 48, from Peppard, is a volunteer gardener at Greys Court, a National Trust estate near Rotherfield Greys.

Ms Macfarlane Duckworth, 44, from Hambleden, set up the Flower Union, an artists’ and florists’ collective that aims to bring people together through flowers.

In the first year of the festival, the women put a boat filled with flowers on display in Henley market place.

This year there were more than 10 events including a floral flotilla on the River Thames, meditative walks at Greys Court, a “green” trail and a community feast, most of which were free to attend.

The women have been friends since 2010, when they met as parents at Rupert House School in Henley. They came up with the idea of the festival after attending a Chelsea Fringe event in north
London.

Mrs Newton said: “I was shocked when I heard the news but I’m grateful to whoever nominated us.

“When we started the festival we couldn’t have foreseen how much it would grow but we’re very thankful to everybody who has supported it and helped it develop over time. The community section of the awards is important because it celebrates women who aren’t necessarily making a direct economic contribution but are making an important difference through their voluntary efforts.”

Ms Macfarlane Duckworth said: “We hadn’t expected to be so successful but we’re thrilled with the support we’ve had.

“The Chelsea Fringe is officially the world’s fastest-growing fringe festival and we’ve been lucky to have a lot of people behind us both locally and globally.

“It’s wonderful to have our efforts acknowledged within the community and we hope it will raise the profile of the festival and bring more people to it.”

DIANA PEARMAN was nominated for her community work in Sonning Common and as chairwoman of the charity committee at Phyllis Court Club in Henley.

She was put forward by fellow villagers and parish councillors Chrissie Phillips-Tilbury and Tom Fort.

The 71-year-old, of Kennylands Road, is editor of Sonning Common Magazine, which won last year’s National Parish Magazine Awards, and was a member of the group which wrote the village’s neighbourhood plan.

Mrs Pearman also helps her husband John to manage the FISH community bus scheme and assists at the village hall’s annual Christmas Day lunch. The couple joined Phyllis Court Club on the recommendation of a neighbour shortly after moving to Sonning Common from Cambridgeshire about six years ago.

The couple had been keen ballroom dancers when they were younger and wanted to get back into it.

Since then the committee has raised almost £36,000 a year, about three times as much as previously.

Beneficiaries have included the Thames Valley Air Ambulance and the Alexander Devine children’s hospice in Maidenhead.

Mrs Pearman said: “I really enjoy editing the magazine. I’d never done anything like it before but I wanted to try something new and it seemed quite attractive.

“It is hard work but Sonning Common is an amazing community — the articles emailed in by the community reveal an amazing variety of expertise and talent.

“I felt very fortunate to be a member of a wonderful club like Phyllis Court and wanted to give something back, which is why I joined the charity committee.

“It is very rewarding and the club has some very generous members.

“Being nominated for this award was quite unexpected but I’m flattered and can’t quite believe it.

“For me, it is rewarding enough to know that people believe you deserve it.”

CHRISSIE PHILLIPS-TILBURY, of Woodlands Road, Sonning Common, was nominated anonymously for the award for her voluntary community work.

The 75-year-old moved to the village from Henley with her husband Michael in 1998.

She became secretary of the village hall committee the following year and then became chairwoman, a role she retained until she stepped down last year.

For the past six years she has hosted a Christmas Day lunch for the elderly at the hall.

She also runs several community meals for charity every year, each with a theme of the cuisine, dress and culture of another country.

Mrs Phillips-Tilbury was
co-opted on to the parish council in 2009 after being encouraged by Councillor Barrie Greenwood, with whom she still serves.

She and Clr Greenwood’s wife Jill run the Village Gardeners group, which meets twice a month to clear up weeds and set up or maintain floral displays.

Mrs Phillips-Tilbury, a former fund-raiser for the charity Feed The Children, also volunteers at the Sue Ryder hospice at Nettlebed, which helped her to care for her husband at home until his death in 2016.

In 2015, she received the High Sheriff of Oxfordshire’s Award for services to the community.

Mrs Phillips-Tilbury said: “I feel honoured and privileged to be nominated.

“I remember telling the High Sheriff that I felt unworthy because I don’t do these things to be a ‘do-gooder’, I genuinely enjoy them, and I think that’s the key to volunteering.

“If you can find something you’re passionate about, you’ll put in a huge amount of work.

“I lead a busy life and like to be involved in lots of different things within the village.

“It’s an amazing place to live with so many opportunities for those who are fortunate enough to be healthy and mobile.

“It’s the kind of place where you’ll always bump into someone for a chat even if you’re making a quick trip to the post office.”

• Next week: Some of the other local nominees in the community category.