Surgery staff warned not to park in disabled spaces 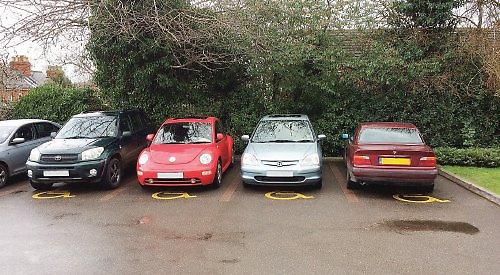 STAFF at two Henley surgeries have been warned not to park in disabled spaces reserved for patients.

It comes after cars belonging to two employees at the Bell and Hart surgeries in York Road were photographed using the spaces by former town mayor Martin Akehurst.

Mr Akehurst, of Two Tree Hill, Henley, was visiting the surgeries on January 4 when he noticed that all four disabled spaces in the car park were occupied by vehicles that weren’t displaying blue badges.

It later transpired that two of the cars belonged to members of staff.

The surgeries say it was a “one-off” incident and staff have been told not to do it again.

Mr Akehurst, who posted an image on social media, said: “The four cars in the disabled spots, even if they do belong to disabled drivers, should have had disabled stickers.

He also claimed that a disabled patient was in tears at the Bell Surgery earlier that week after not being able to attend an appointment as there was no room in the car park.

The driver had left their car blocking others in the car park to dash in but then had to park elsewhere.

Mr Akehurst said: “I went to the desk and two disabled people came in. One was almost in tears saying they needed to get in and the receptionist said it was nothing to do with them. That person didn’t get to the appointment and I think that’s appalling.”

The incidents are the latest in a series of problems with the car park, which is shared by the two surgeries.

Louise West, practice manager at the Bell Surgery, said: “The car park on that day was phenomenally full. It’s often busy but on that Thursday it was abnormally full.

“However, I would hope that an incident like this, where staff members park in disabled spots, is a one-off. Staff using those spaces is unacceptable. That’s not the message we want to convey.

“We are taking a very firm stance and have informed all our staff that the disabled spaces are for disabled patients. Those two members of staff have been spoken to and won’t be doing it again.

“We have an area for staff parking and we all block each other in to get as many of us in as possible. Once that’s full we park at Waitrose and walk to the surgery.

“The disabled spaces are also for the frail and acutely unwell so you don’t always need a blue badge to park in those spaces. We are relying on patients being kind and neighbourly.”

The system required patients or reltives transporting them to enter their vehicle’s registration number at a touchscreen in reception in order to obtain up to 90 minutes’ free parking.

Anyone who failed to register, or registered incorrectly, was sent a £60 penalty notice which increased to £100 if it was not paid within two weeks.

The system stopped in November after the surgeries cancelled the company’s contract following a series of complaints from patients about unfair fines. The clampdown was introduced in April because the car park was being abused by shoppers and other people not visiting either surgery.

He said: “People are using it for free long-term parking and nothing to do with the surgeries.

“When the parking company came in there were fewer cars. Now they have lifted the restrictions because that mob kept getting it wrong but the problem is the car park is absolutely rammed.

“Whenever I go to the Bell Surgery I’m happy to park at King’s Road car park. Let’s leave spaces for the people who need them.

“I think they want to try another parking company, someone with a bit of common sense.

“People might enter their registration and miss one letter because they are in a rush as your mind is elsewhere when you go to the doctor.

Mike Smith, 77, was issued with a fine after parking in a disabled space at Townlands Memorial Hospital last month as he was unable to find a space at the surgeries’ car park.

Mr Smith, of Wargrave Road, Henley, had been dropping off his wife Elizabeth, 74, at the Hart Surgery for an appointment.

He remained in the car and displayed his blue badge until his wife returned about half an hour later but received the penalty notice in the post the following week.

Mr Smith said: “I think Smart Parking are an unpleasant lot. They give no consideration to people’s circumstances.

“I’m glad the doctors have got rid of it now, it’s the right thing to do.

“I was disgusted to receive the fine because they have a narrow base for what they do. If there’s any grey area they don’t want to know.

“It’s diabolical and I was amazed and disgusted that they couldn’t even justify the fine. People with disabled badges aren’t generally the most lively people so this is the last thing they need.”

Janet Waters, chairwoman of the Bell Surgery’s patient participation group, says she parks in the disabled spaces on occasion but only to help her 91-year-old mother get to appointments at the surgery.

She said her car was at the surgery when Mr Akehurst visited but was not parked in a disabled space.

She said: “My husband and I will only park in those spaces if there are no others available, that’s the point. My mother is having regular treatment for her legs and heart.

“When the Smart Parking scheme started we wrote as a patient group to make clear that those spaces are for the frail and elderly.

“I still think it’s appropriate to look for another space but sometimes there aren’t any available.

“We wouldn’t park there by ourselves, we would try and drop off at West Street or park at Greys Road car park.

“As a patient group, we are trying to promote that those spaces are for those in need.”

Mrs West said the patient participation group had looked at possible alternative schemes and patients had made suggestions but none was suitable.

She said: “One idea was a barrier but with the congestion in York Road the only way we could do that was to have a barrier for coming in and another for going out, which would take up parking spaces.

“Another thought was an attendant but who is going to pay for that?

“Every option we looked at wasn’t going to work and would upset patients. We couldn’t find a solution so we decided it’s about being neighbourly and respecting other patients. The priority has to be for patients who are frail, elderly or acutely unwell.

“The frustrating thing is the abuse of the car park, which is why we brought Smart Parking in.”