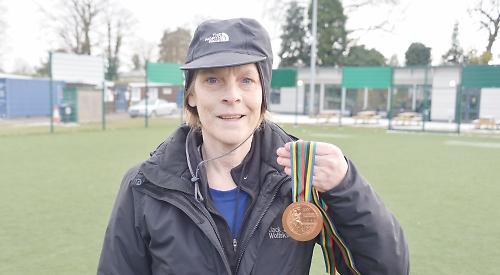 PUPILS from four schools were given a hockey masterclass by an Olympic medallist.

Mandy Nicholson, who won bronze at the Barcelona Games in 1992, put about 40 youngsters through their paces on the artificial pitch at Henley Rugby Club, off Marlow Road.

The children came from Rupert House School and Valley Road and Badgemore primaries in Henley and Nettlebed Community School.

They went through a series of exercises to learn skills such as dribbling, weaving between players, shooting and stopping the ball.

The pupils were supervised by a group of year six students from Rupert House, an independent prep school in Bell Street, where Ms Nicholson is head of games.

The afternoon wrapped up with an inter-schools tournament which was won by Valley Road Primary School. Every child who took part was awarded a certificate.

Ms Nicholson also showed the children her medal. She said: “We’re always looking to build links with other schools in the area and I thought this was a chance for children to try something they hadn’t done before.

“They enjoyed seeing my medal and while I wasn’t suggesting we can all become Olympians, hopefully it will encourage them to pursue a sport.

“It was a very cold day but the children coped well and really threw themselves into it. We had really good feedback from the parents and the other schools that took part.”