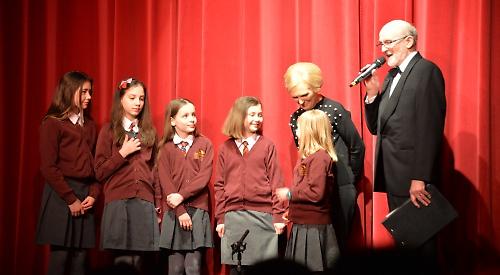 She congratulated the pupils from Badgemore Primary School who won a special award for creativity in their performance at this year’s event.

They closed the festival’s gala night at the Kenton Theatre on Saturday by performing their own version of Close Every Door from Joseph and the Amazing Technicolour Dreamcoat.

Berry, who bought a house in Henley last year, was cheered as she was revealed from behind the red curtains and gave a small gift to each girl.

Speaking on stage, she asked each girl to give their name to the audience before calling them “the magnificent five”.

The gala night was the climax to this year’s festival, which marks 25 years since it was founded.

It saw performances by youngsters from this year’s festival and the return of stars from previous years.

There were also video tributes and memories shared by those who have taken part over the years.

Some of the returning performers included Miss Liddell, Katie Moberley and Emily Heath.

Singer Megan Henwood sent a video talking about what the festival meant to her. Rebecca and Dixon and Henry Betts gave their memories and a video was shown of them performing when they were younger.

Speaking on the night, Mr Hay said: “We have got miscellany of young performers from this week and slightly older ones from several years ago to showcase the talents they have got.

“There are a few nostalgic photographs and films. That’s a good mix. It’s a bit like having your cake and eating it.”

For full coverage of the festival, see this week’s Henley Standard.