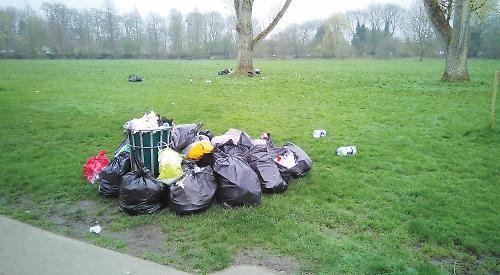 THE Mayor of Henley has condemned revellers who left a riverside beauty spot strewn with rubbish.

Hundreds of people visited Marsh Meadows on Saturday April 14, to celebrate Vaisakhi, the Sikh new year festival, but left the area looking like a tip. They had also used it as an outdoor toilet.

There were also reports of residents remonstrating with the visitors in Mill Lane, where the car park was overflowing. Cars were parked on one side along the entire length of the road as well as on double yellow lines, which caused congestion.

On Sunday morning residents and visitors were horrified to find piles of bin bags full of rubbish and litter all over the grass along with used barbecues, bottles and food as well as plastic drifting down the Thames.

Dog walkers said it was unsafe to let their pets off the lead because of the broken glass and chicken bones left on the ground. Other people said the bushes and nearby gardens had been used as a toilet.

Many residents complained to the Henley Standard and on social media about the mess, saying the visitors should have cleared up while some accused the town council of not doing enough to control the area following similar problems in previous years.

Mayor Kellie Hinton said the council would have to take action in future but said the blame lay with those attending the unofficial celebration on what was the first warm and sunny day this year. She said: “Perhaps it’s because they’re not from Henley so they have no investment in the area, or perhaps it’s because they are disgusting human beings. Whichever’s the case, it has got to stop.

“The festival people came to use the area to barbecue and party and they were using the hedges around the meadow as a toilet. What kind of degenerate would rather poo or wee in a bush than go to the toilet, which is five minutes away?

“I don’t go to other towns and start trashing them just because I don’t live there. I treat them with the same respect I expect Henley to be treated with.

“When they left they bagged up most of their rubbish and they left it by the bins and didn’t take it with them. They didn’t tie the bags securely so it blew across the meadow.

“This is not just unattractive and horrible, it’s also a health and safety concern for dogs.

“I can understand people’s frustration — I’m frustrated about it myself. It makes my blood boil knowing our ‘parkies’ had to go and clear up after this.”

She said: “We have had extra staff on that weekend, or we have gone to that community and tried to speak to them and we have banned barbecues in Mill Meadows. We have put in barbecue stumps to stop the grass being burnt.”

Councillor Hinton said the council would have to consider issuing barbecue permits with locals paying less than visitors. It may also consider asking the police to have extra patrols on duty at the time of next year’s celebration.

Councillor Sarah Miller, who chairs the council’s recreation and amenities committee, said: “I’m really saddened to see it again because this happened last year. It needs to be dealt with sooner rather than later.

“I don’t want to see people using the meadows as a public toilet. This is something I’ve seen with my own eyes as I run up there and this needs to be looked into — it’s just nasty.

“I’m disgusted honestly, absolutely disgusted. I don’t understand the mentality of people that would do that — there are toilets just down the road.

“It’s just disrespect for this town and is something all of us councillors are taking very seriously.

“I will put something on the agenda for the next committee meeting on ways we can deal with this.

“I don’t like the idea of huge great signs in Marsh Meadows saying ‘don’t do this, don’t do that’ but obviously if we don’t actually act now it’s going to get worse.

“I don’t particularly want to ban barbecues because it’s just unfair to so many of our visitors who come to Henley, who don’t leave a mess, clear up behind them and have a lovely day.”

Roger Murray and his wife Dale, from Binfield Heath, walk along the river regularly and said they were horrified to discover the mess on Sunday.

Mr Murray said: “It was devastation. The bins were all overflowing — it was appalling.

“The number of residents stopping and talking to the park warden, saying ‘what has been going on?’ It looked as if we had just finished Reading Festival.

“It just shows a complete lack of care for other people. You’re going to come to a beautiful place like this to have a picnic and leave it in such a state that no one would want to have a picnic there. It was completely disgusting.”

Maureen Dougall, of Station Road, Henley, said she walked by the river every day and was shocked by the amount of litter left behind.

“It was totally disgusting,” she said. “Litter, although mostly disposed of in black bags, had been torn open overnight by the wildlife.

“We met a couple walking their black Labrador who had picked up chicken bones, which could have been fatal if the owners had not caught the situation in time.

“The owner of the house at the end of Mill Lane had been inundated with people peeing into her garden and leaving even more litter.

“It seems that there had been some kind of food festival held by families visiting Henley and they had deemed it okay to leave all their litter, ground sheets and blankets behind for our park staff to collect the following day.”

Mrs Dougall suggested that the meadows needed to be supervised during the summer.

“It is fine to enjoy everything that Henley has to offer and visitors are to be welcomed, but this should not incur extra work for our public services which are under great financial pressures, notwithstanding the dangers of pollution to wildlife and dogs .”

Janet Wood, of Boston Road, Henley, suggested the council should pay a park ranger to work at weekends and have radio contact with the police.

She also suggested charging people for parking in Mill Lane at weekends, introducing a picnic charge and installing large information signs about the benefits of looking after the area.

Anyone leaving rubbish next to the small bins should be fined on the spot by the ranger.

Another resident, who wanted to remain anonymous, said the parking in Mill Lane meant she couldn’t access her home.

She said music was being played until 10pm and people were urinating in bushes and at the edge of her garden as well as throwing toilet paper around.

The following morning she said the meadow looked like a bomb site “with excrement and rubbish scattered everywhere”.

“I also had them trespassing in big groups in my garden with no regards for private property.

“This, I believe, has gone too far and even though myself and others have contacted the council several times there seems to be no understanding of the extent of the problem.”

In October town councillors said the litter problem caused by visitors at Marsh Meadows last summer had been the worst ever.

This came after a group of visitors sparked concern when they drove two cars on to the meadow and then lit a fire.

Barbecues in Marsh Meadows were banned in 2013 following complaints but the ban was lifted the following year when the town council installed tree stumps with a steel plate nailed to the top where barbecues can be placed. Barbecues on stands are also permitted but open fires are not.