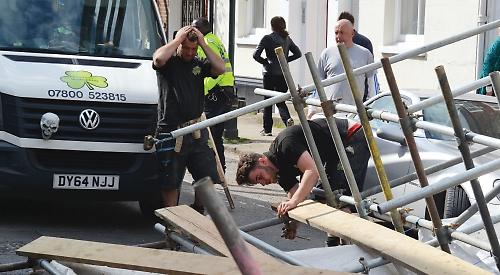 A PAINTER had to leap to safety when the scaffolding he was on collapsed in a Henley street.

The 30ft metal structure was blown over by a freak gust of wind in New Street on Tuesday afternoon, just a day after being erected.

The metal poles smashed the windscreen of a parked car and the back window of another and the street was blocked by the wreckage, which led to traffic congestion throughout the town.

The painter, who had been on the scaffolding to paint the windowsills of a three-storey house, jumped from about 10ft and injured his foot as he landed.

Residents took him indoors to recover as he was said to be “shaken”.

The street was closed for about 90 minutes while police redirected traffic and workmen dismantled the scaffolding, which had been erected by Dockers Scaffolding, of High Wycombe, on Monday.

The owners of the house were out when the incident happened at about 3pm and were alerted by neighbours.

Dave Eccles, a decorator who was part of a team working on the house, said: “We’d just wrapped up when there was a massive gust of wind and it just went.

“I was literally about 10ft away from where it fell packing my tools away. I’d got off it about 20 minutes before. I shouted, ‘oh my God, get out of the way’ and luckily there was a break in the traffic.”

Mr Eccles said the painter was the only man still on the scaffolding when it fell and was on his way down.

He said: “He was the last one getting down before it went. He pretty much had to spring off.

“He’s fine — he hurt his toe jumping out of the way. He’s a young lad so he takes it in his stride. I think he’s enjoying the tea and biscuits and a cuddle!”

Staff from the scaffolding company later arrived in a van to clear away the structure and one was visibly distressed at the damage.

Residents and staff from nearby businesses crowded around to watch the clear-up operation.

Many said they had heard a loud crash as the scaffolding fell.

Amanda Mullins, a legal cashier at Mercers Solicitors, said: “I was sitting there and I heard creaking and then I heard shouts and screams and a giant bang.

“I ran outside and saw the guys scrambling around. Everyone was saying they were fine and they weren’t hurt. I think they were shaken but they were saying ‘we’re fine, we’re fine’. I was shocked. “It was such a random gust of wind. It was just one gust — the sky turned brown and then it was clear within seconds.” Neighbour Nicky Woods was in her lounge when she saw the scaffolding fall. She said: “There was one big gust of wind and it went. I was just hoping that nobody was going past at the time.

“It was quite catastrophic watching it go.”

Former Olympic skier Graham Bell, who lives in the street, said: “I was down straight away to check if anyone was hurt.

“There was one young lad who had been up the scaffolding at the time and he was hobbling around with a twisted ankle but everyone else seemed to be okay.

“Imagine if someone had been cycling along the road, or there was a motorbike or a bus. It could have been really nasty.”

His wife Sarah said: “I heard a cry and then a crash and this big billowing cloud of dust went past the window.”

She said the plastic sheeting on the scaffolding might have acted like a big sail, adding: “It was getting really gusty.!

Mr Bell directed traffic at the mini roundabout on Bell Street together with Hugh Legh, who had been working at the Kenton Theatre.

The pair also had to get two buses and a number of cars to reverse back up New Street.

Mr Bell said: “I was up helping outside Rupert House School and then got people to either head out of Henley towards Marlow or go around by King’s Road.”

Police called to the scene took over control of the traffic and some officers helped clear away the scaffolding.

Long tailbacks built up with traffic backed up on Northfield End and the Fair Mile as far back as the Assendons as well as on Henley Bridge.

The damaged cars are thought to belong to residents.

A metal pole pierced the windscreen of a Mercedes estate and the back window of a Renault Clio was also smashed.