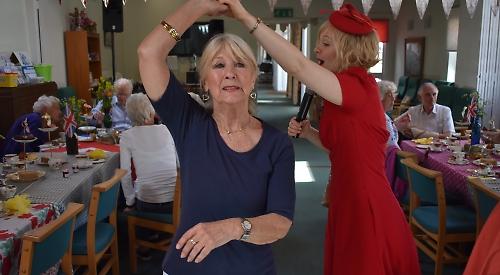 DOZENS of elderly residents of Henley enjoyed live music and dancing at a tea party in memory of former mayor Tony Lane.

The Henley 60+ Club hosted the second annual event on Thursday last week, which also included tea, cakes and sandwiches made by Charlotte Cavanagh of Time for Tea.

Guests were seated on two long tables at the club in Greys Road car park, while singer Fiona Cox performed songs from the Fifties and some guests got up to dance. The visitors on the day included Mr Lane’s old school friend Rupert Goodchild, 92, and his wife Iris and Vi Harding, who has been attending the club for more than 10 years.

She said: “The club is a blessing is disguise when you live on your own, you’ve got somewhere to go and they go out of their way to make us happy.

“When my husband died I didn’t know what to do because he was the one who did everything. I heard about this place and came down. It’s a home from home.” The first event last year was funded by a £1,000 donation from the Anthony (Tony) Lane Foundation, a charitable trust set up to donate money to community groups and voluntary organisations.

Gill Dodds, who chairs the club’s management committee, said that after sending pictures of the event to the foundation, they were given another donation to hold it this year.

She said: “They have given us the money to have this party, which is very kind of them. I will send them some more photos. It’s hopefully becoming an annual event and everyone has had a good day.”

He was living at the Acacia Lodge care home in Quebec Road, Henley, when he died, aged 87, in March 2014.