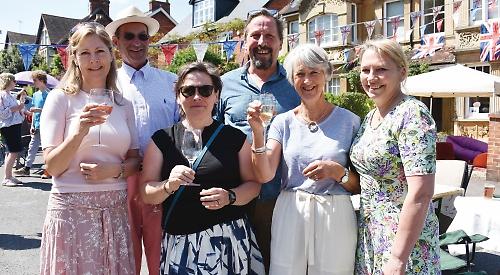 The event, which was organised by resident Nick Fox, included children’s games, face-painting, a baking competition and a treasure hunt around the houses with “royal” clues.

The street was decorated with bunting and Union flags and one guest brought along a life-sized cardboard cut-out of the Queen.

Residents brought food to share with their neighbours and sat at long tables in the middle of the road for lunch.

Mr Fox also organised a street party for the wedding of Prince William and Kate Middleton in 2011.

He said: “It seemed obvious to do another one and I had an overwhelmingly positive response from the neighbours.

“It was an opportunity to celebrate a really nice occasion. It’s exactly the sort of thing we should be celebrating.

“It’s a nice way for people who live close by to come together and spend a bit of time with each other because quite often we’re busy rushing off to get the train or whatever and we don’t get that opportunity.

“One of the primary drivers was for the children to have a brilliant time and to have memories that stick with them.

“It was great. A lot of people said what a great time they’d had. The weather was glorious and what was really nice was that all the tables fitted together as people helped themselves and were sharing and chatting.

“One of the guys who came said we may not have another royal wedding for a generation so we have got to take the opportunity while we can!

“Thank you to Henley Town Council and South Oxfordshire District Council for permission to close the road.”

Julie Roden, who lives in the street, said: “We love our neighbours. This is something that the kids will remember forever because I remember street parties from when I was a child.”

Meanwhile, an “alternative” royal wedding party was held on Mill Meadows in Henley on Saturday.

Singer Michelle B, from Flackwell Heath, performed on the bandstand dressed in a Union flag dress.

She sang Whitney Houston’s I Will Always Love You and other classic pop songs as the audience danced.

Michelle also played singing games with the crowd. She performed House of the Rising Sun and asked who had sung it previously.

The first person to answer was a man from Santa Barbara who knew it was Eric Burdon from The Animals in 1964.