Children stage the ‘greatest’ show for parents at Trinity Hall 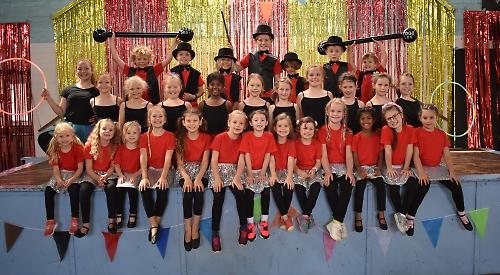 MORE than 30 children from schools in Henley and the surrounding area staged a show for their parents.

The week-long programme was run by Steph Maxwell’s Divas and Dudes Academy. Children from Trinity, Rupert House and St Mary’s schools in Henley, Oratory Prep in Goring Heath, Crazies Hill primary and Shiplake primary took part in a series of rehearsals  last week before performing for 70 parents at Trinity Hall in Harpsden Road on Friday.

They played ringmasters, strongmen and acrobats, while others also performed with hula hoops and batons.

It is the sixth year Mrs Maxwell has staged a show after Joseph, Grease, High School Musical vs Glee, Matilda and The Lion King.

Mrs Maxwell, of Newtown Gardens, said: “It’s five days with three hours a day and then straight to the full show with costumes, scipts, songs and dance routines, so they have been amazing.

“It’s fun but quite demanding and some of them are only five or six but they have done really well and worked so hard. I’ve had emails from parents saying ‘we’re learning our lines over dinner’.

“It’s such a popular film that the children already knew the songs so our work was made slightly easier.

“Each year it’s got bigger and better. It’s great for confidence building — a lot of them have never been on stage before and they are learning new skills.”