Knights are joust the ticket at Henley Show 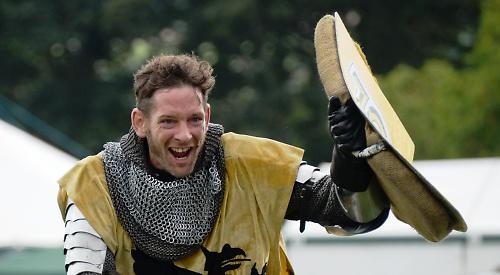 BATTLING knights in full suits of armour were among the new attractions at this year's Henley Show.

Thousands of people attended the 127th event, which took place at the Henley showground off Marlow Road on Saturday. The highlights included a display by the Knights of Middle England, a stunt team based at Warwick Castle, who gave demonstrations of medieval combat techniques while riding at speed on horseback.

There were four “knights”, each of whom was sponsored by a local company or individual, and the crowds were encouraged to pick a favourite and cheer them on. Meanwhile, trophies were awarded for produce and livestock in a range of classes including cattle, sheep, poultry, fruit and vegetables and flower arranging. There were demonstrations of gun dog training, hunt packs with horses and hounds, sheep shearing and wool spinning as well as a children's fun fair with a helter-skelter, roundabout, giant slide, inflatable obstacle course and Punch and Judy show.

Another popular activity was "zorbing", in which youngsters climbed inside inflatable rubber spheres and ran along the surface of the water in an inflatable pool. The event closed with a series of parades including one featuring all the animals that took part and another featuring several dozen vintage tractors.

For the full story, results and a spread of photographs, pick up a copy of Friday's Henley Standard.