Family proud to see soldier pass out of Sandhurst 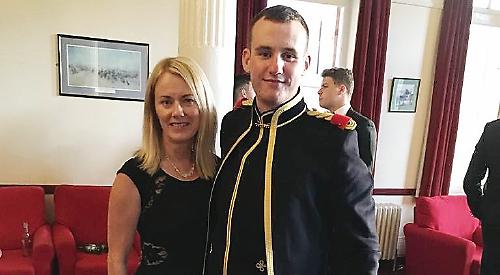 A YOUNG soldier from Henley has graduated from Sandhurst Military Academy.

He has now joined the Royal Logistic Corps and will undergo its troop commander’s course at Deepcut Barracks, near Guildford, until December.

He will then move on to the Duke of Gloucester Barracks, near
Swindon.

2Lt Lane hopes to go on to train as an ammunition technical officer specialising in bomb disposal, having previously obtained an electronic engineering degree from Aston University in Birmingham.

He said: “It’s a long process to go through university and Sandhurst so it is amazing to commission.

“You complete training in military, academics and leadership. It initially focuses on the military side of it and then later it focuses on the academic side and there is a lot of leadership theory.

“It’s very fast-paced and it’s not uncommon to be doing 16- or 18-hour days in the first term. We went out and did some tough exercises in Brecon when it was snowing.”

His commissioning ceremony was attended by his parents Mark and Rachel and younger sister Stephanie, who is studying for a biology degree at Oxford Brookes University, and his grandparents John and Annette Chamberlain, of Western Road, Henley, as well as three of his friends from university.

He had wanted to join the forces since he was a child. He said: “It always seemed like a good option and I have always had an interest in engineering, so it was a natural fit.

“I’m not really sure how I decided on bomb disposal. I heard it had the technical aspect and it’s a challenge so it’s definitely something I want to look into.” Mrs Lane, who is a human resources manager, said: “It’s great to see how proud he is of his achievements. The army seems to have brought the best out in him and the new role suits him.

“Sandhurst was tough but it was really rewarding for him to get through it.”