Quakers to give out white peace poppies 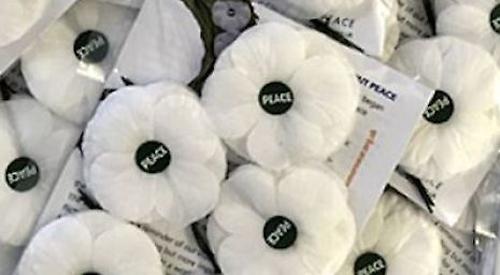 WHITE poppies promoting peace are to be given out by the Henley Quakers in the run-up to remembrance.

Members of the group will have a stall in Falaise Square next Sunday (October 14) from 12.30pm to 3pm.

The poppies are worn in memory of people who have suffered or are suffering as a result of war, wherever they are in the world. They honour them by supporting work for peace through education and mediation.

White poppies were first worn in 1933 by the mothers, sisters, wives and friends of servicemen killed in the First World War.

They saw Hitler coming to power in Germany and the the rise of the Black Shirts in Britain. Like many people, they feared the Second World War that was to come and were determined to voice their concerns.

The Quakers say the women’s message was “Never again should people give their lives in wars” but a century after the war to “end all wars” millions of people are still dying in conflicts. Diana Barnett, a member of the Henley Quakers, said: “White poppies have been around for a long time.

“The original ones were made by mothers and widows back in the Thirties who had lost their menfolk in the Great War.

“They were very concerned their loved ones had given their lives in vain because they had been assured there would never be a war like it again.

“They wore these white poppies as a demonstration that they wanted people to think about peace and talk.”

A charity called the Peace Pledge Union, the oldest secular pacifist organisation in Britain, later took over the production of the poppies and it still makes them today.

Mrs Barnett said: “People took to wearing white poppies just to remind others that there are alternatives to war. The majority of Quakers are pacifists. We’re very much in favour of peace-building locally and globally and like to think that it should be possible to sit down and talk to resolve issues before conflict arises.

“We support the white poppies because we believe there’s an urgent need for more co-operation to resolve conflicts non-violently and that peace should start with everybody. When we wear them we now say, ‘let’s work for peace’.”

The Quakers say the poppies are to complement the red ones worn at Remembrance rather than compete with them.

Mrs Barnett said: “People are thinking, particularly this year, about the centenary of the end of the First World War.

“Peace building is more than just stopping wars, it’s about building strong relationships with people and it doesn’t necessarily have to be nations — it can be within your work or families.”