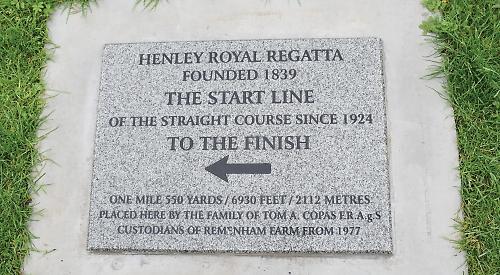 A PLAQUE marking the start of the Henley Royal Regatta course has been unveiled.

The engraved Italian marble stone was installed at Temple Island Meadows by the Copas family, who have owned the land since 1977.

A wooden bench with an inscription had previously marked the start line but business founder Tom Copas wanted something more permanent.

The regatta was first held in 1839 but the plaque informs passers-by on the Thames Path that it has been held on the current course since 1924. It also features an arrow pointing upstream towards the finish line.

Mr Copas, from Maidenhead, said: “I thought it was appropriate for people who walk this famous piece of river to understand what it is about.

“It adds to the regatta and people realise how significant this point is.

“During the first 85 years the regatta started from various points and then it settled on this course in 1924. There was a wooden bench there but they don’t last more than about 20 years so I thought we had to put in something with much more longevity.

“It makes it a bit more obvious because if you don’t look at a bench you could walk past and not realise what an important point it is.

“People would say to themselves that they rowed from there to the church. Now they know exactly where they started from.

“I went to the opening of the new regatta headquarters in 1986 and I met a man who rowed on the old course. It’s 95 years next year since it started from here.”

The plaque was designed by Ross Stonework, of Slough.

Mr Copas said: “I’m delighted with it and I hope it’s going to be there for a long time. It’s built to be very solid.”

He hopes plaques can also be installed at other checkpoints along the course — at the Barrier and
Fawley.

Mr Copas explained: “With the regatta on TV now and the commentators saying the times to the Barrier and Fawley, it’s more important for the actual rowers but it’s interesting for people to say, ‘yes, I was there’.” Since the foundation of the regatta four different courses have been used:

• The Old Course, in use from 1839 to 1885, started on the Berkshire side at the upstream end of Temple Island and extended upstream for about one mile and 550 yards to finish near Henley Bridge.

• The New Course was inaugurated in 1886 and, at the same time, the number of crews in a heat was reduced to two. The New Course started on the Buckinghamshire side near the downstream end of Temple Island and finished at Poplar Point. It was piled and eventually boomed throughout and included two slight angles.

• The Experimental Course — the first to be in a straight line — was only one mile and 440 yards in length and was tried in 1923. The start was on the Berkshire side of the island and the finish a short distance upstream of Poplar Point.

• The Straight Course, first used in 1924, required the removal of part of Temple Island and part of the opposite Berkshire bank. This course is the same length as the Old and New Course. It is 80ft wide and runs straight from below the Berkshire side of Temple Island to finish at Poplar Point.