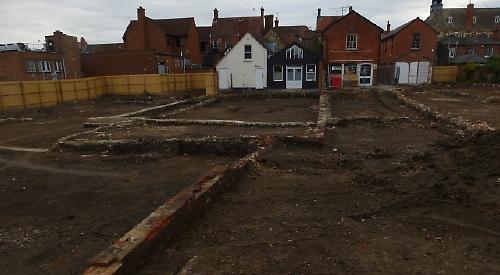 ARCHAEOLOGISTS hope to uncover evidence of how Henley began and then developed at a dig in the town centre.

These were used to grow food or keep animals and were laid out when Henley was planned either side of what is now Market Place.

Richard Oram, a planning archaeologist at Oxfordshire County Council, who has been working on the project, hopes to discover plots dating back to the 12th or 13th century.

Catalyst Capital is to redevelop the mews into 23,000 sq ft of shops and 14 flats to be known as Gardiner Place. This is scheduled for completion in early 2020.

A full excavation was required as a condition of the planning permission after an archaeological evaluation in 2010 uncovered a series of 17th century walls across the site. Mr Oram said: “It’s a very good opportunity to hopefully recover some evidence crucial to understanding the development of the town and what it looked like in the 12th and 13th centuries.

“From what I’ve seen initially, I’m hopeful we will be getting really good evidence to illuminate that part of the picture.

“Any evidence of how the early town looked will be very important to the community.

“Henley is a planned medieval town rather than an organic development — it was laid out fairly close to what you see in the centre of town today. There was what we call a cigar-shaped town centre. The medieval guild hall would have been where the town hall is now and they would have laid out houses either side of that.

These burgage plots were kind of tenant gardens and were used for producing food and putting animals on. The most obvious thing that people will see is a series of walls marking out the individual plots. We hope to find how early these walls started as we move on.

“We have also got a series of walls that probably date from the 17th century and there are certainly multiple phases that have been built over the years.

“The latest ones are brick dating from the 18th and 19th century and into the Victorian period.

“The plots themselves, the walls and the features will be recorded with a differential GPS system.

“This is an emerging picture and everything could change depending on what’s found.”

Mr Oram said it was unusual to have a large scale excavation in the heart of a town centre but that a lot of the archaeology had been preserved because the land had been used as a car park for many years.

The dig, which is being carried out by AOC Archaeology, of Twickenham, is expected to last several weeks. After taking off the top layer of the car park with large machinery the team are using hand tools for the more detailed work.

Mr Oram said that to reach the original walls for the plots, if they exist, would require digging to a depth of half a metre to a metre.

He said that several wells dating from the late Victorian period had also been uncovered.

Ruth Gibson, secretary of the Henley archaeological and historical Group, is excited by the discovery.

She said: “Everything going on in a medieval town should be reflected in those plots.

“What they are hoping they will find is a lot of evidence of what was happening there. We know there were shoemakers and maltsters.

“It was the working part of the medieval housing plots. These were really essential parts of the life and work of the owners, or the tenants, of those plots.

“It’s a big window into our past and an opportunity to see quite a lot of the early town.”