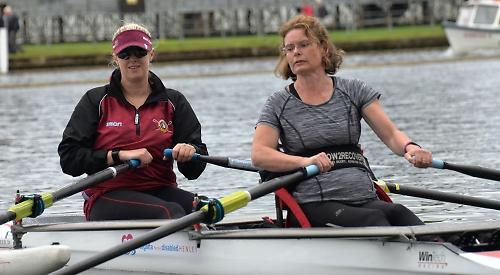 THE organisers of Henley Regatta for the Disabled have donated an accessible boat to the River Thames’ disabled rowing community.

The specially adapted double scull, which was funded by a £5,000 donation from the Rotary Club of Henley Bridge, undertook its maiden voyage from the regatta site at Phyllis Court Club in Henley on Sunday.

It is slightly wider than a regular scull and has detachable floats on either side to stabilise it for athletes who cannot use their lower limbs or core muscles while the bow seat has a chest strap to secure the occupant in place. The second seat allows a visually impaired rower to compete with their partner navigating.

The shell, which is named R4D and bears the logos of the regatta and the Rotary club, was unveiled by regatta chairwoman Lucy Bowley and club president Paul Harrison in front of a small invited audience.

They lifted a cloth from the bow to reveal its name then poured champagne over it for good luck. Also present were Henley MP John Howell and Paralympic gold medallist Helene Raynsford, who are trustees of the regatta.

The boat was then lifted into the water and rowed downstream to the Eyot Centre off Wargrave Road by Paralympic gold medalist Naomi Riches, who is registered blind, and fellow Marlow Rowing Club member Sally Hopewell, who uses a wheelchair.

It will be donated to Marlow RC as the club is recognised as a centre of excellence for disabled rowing but it will be displayed at the regatta each year as long as it is not being used in competitions.

The regatta committee decided to purchase it as the event marks its 10th anniversary this summer.

Mrs Bowley said: “We wanted to celebrate with something longer lasting than just a single day’s event and we had lots of discussion with Marlow to work out exactly what they needed.

“It will be used at least three times a week by a disabled rower and they already have a similar one so this will allow double the number to get out on the water.

“It could change someone’s life by giving them the tools they need to progress to a high level in a very competitive sport. There’s no reason why one day an Olympic rower couldn’t have trained in our boat.”

Raynsford said: “It’s wonderful that the regatta has grown so much and this donation is a great testament to the work which the committee has put in.”

Riches said: “Marlow has one of the leading adaptive rowing squads at club level and it’s wonderful to have the regatta’s support.”

The committee has also secured 10 year-long memberships to Henley leisure centre for disabled people and is now inviting applications which will be judged against eligibility criteria.

This year’s regatta will take place on Saturday, August 31 with bell boat racing, entertainment and more.