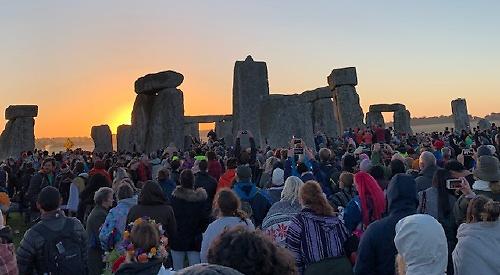 A JEWELLER from Henley who was the last baby to be delivered at Stonehenge returned to his birthplace to celebrate the summer solstice.

David Rodger-Sharp, who owns the shop of the same name in Duke Street, was among 10,000 revellers who watched the sun rise over Salisbury Plain at about 5am on Friday.

It was only his second return to the English Heritage site following a brief visit in April.

The 35-year-old was born on June 25, 1984 during the annual Stonehenge Free Festival, an underground music and alternative lifestyle event which lasted for up to three weeks and attracted crowds of about 30,000 people.

It was cancelled the following year when the ancient sandstone monument, which dates back to at least 2000 BC, was fenced off amid fears that it was being damaged by revellers.

Mr Rodger-Sharp, who lives in Reading Road with his husband John and their Jack Russell Alfie, set off for Stonehenge at about 11am last Thursday with his friends Marie Rowe and Nicky Stevenson, also from Henley, and arrived at about 1am.

More than 5,000 people had already gathered in the stone circle, which may now only be accessed for religious purposes during the summer and winter solstice and the spring and autumn equinox.

He stayed for about five hours and gave interviews to the national press before returning to Henley and working a full day.

Mr Rodger-Sharp said: “It was full of people from all walks of life. There were hippies, pagans and Hare Krishnas all drumming, singing or playing music and people were sleeping on the stones, praying to them and worshipping them. It made me appreciate how so many people hold them in high regard and how lucky I was to have that connection. It was a surreal experience but also quite magical.

“The atmosphere was respectful from start to finish, although clearly there was a lot of cannabis being smoked and the police were mostly overlooking it.

“There were only four arrests and for minor offences, which for an event of that scale is pretty good.

“By sunrise there were 10,000 people, so it was pretty full. The sun rose at 4.52am and crossed the horizon about 10 minutes later and both times there was a massive cheer.

“Everyone was pretty happy and excited — probably in part just because they could finally go home!

“We were so lucky as it was a beautiful night with really clear skies. The stars were glistening and you could see some of the planets. I’ve never really looked at the sun with admiration before — you just take for granted that it rises every day without much more thought.

“I had to get back to open the shop and went to bed at about 7.30pm that night. I don’t think I’ve slept so well in a long time.

“I was absolutely exhausted but it was very worthwhile.”

Mr Rodger-Sharp was born six weeks premature during a performance at the festival by progressive rock band Hawkwind.

He was named after paramedic David Nobbs, who delivered him.

He said: “I spoke to him on a radio show about five years ago. He’s still living in Wiltshire and remembers this young woman saying she would name her child after him because of how well he looked after her. He assumed she was just being nice, but she meant it.

“He delivered three boys and a girl at the festival between 1974 and 1984. It was billed as ‘sex, drugs and rock ‘n’ roll’ and was very much a free-living event. People came from up and down the country and it was a known fact that people went with the intention of giving birth because of the significance of the site.”

His parents Nick and Maxine Sharp, whom he describes as “old hippies”, had become separated earlier in the day so his father was unaware until he overheard a group of Druids excitedly discussing the birth.

Mr Sharp did not realise it was his son until he was reunited with his wife. Mr Rodger-Sharp said: “I think I arrived very suddenly — I don’t imagine Mum remembers it very well but she’d always wanted her son to be born somewhere special.

“She wasn’t explicitly planning for me to be born at the festival but she certainly wouldn’t have been against the idea.”

The family returned to their home in Suffolk and later relocated to Edinburgh with their older daughter Laura, now 39.

Mr Sharp left the family when his son was eight and died four years later but the others stayed in Scotland until Mr Rodger-Sharp, who has been a jeweller for a decade, moved to Oxford in 2016.

He took over the former Henley Goldsmiths premises last year.

He returned to Stonehenge for the first time on April 24 following a conversation with customer Mark Sayer-Wade, the music producer for the BBC programme Who Do You Think You Are?, who said he should share his story more widely.

Mr Rodger-Sharp approached English Heritage and was invited to spend an hour among the stones by himself on a morning usually reserved for broadcasters and film crews to shoot footage.

He said: “Mark said it was a brilliant story and English Heritage were really interested as they didn’t realise that sort of thing had ever happened.

“They were fascinated to know more and asked me to bring my passport and birth certificate which says I was born at ‘Stonehenge, Salisbury Plain’.

“I suppose it’s nice to have that and it’s certainly useful in business meetings when people ask you to share an ‘interesting fact’ about yourself as an ice-breaker!

“I’d generally thought about it in a matter-of-fact way, although we used to laugh about it when I was younger because if I left a door open, Mum would say, ‘You weren’t born in a field’ and I’d say, ‘Well, actually I was’.

“It was nice to go in along the first time to feel the energy of the place and reminisce about my life. It has definitely left a mark on me as it’s a magical place with huge value to the country and a real mystery surrounding it.

“It was strange because I was essentially going back to my maternity ward, yet most other people see it as an old ruin. It’s hard to describe the feeling of standing at one of the great wonders of the world and knowing you were born there.”

He plans to return with his mother for either the winter solstice on December 22, when the sun rises at about 7.20am, or the next summer solstice.

Mr Rodger-Sharp said: “Mum is still very much an old hippy at heart and still into Mother Nature, so it will mean quite a lot for her. I think the winter solstice might be more practical as we won’t have to stay up through the night!”