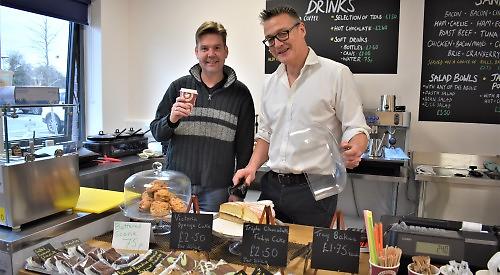 A NEW coffee shop at Townlands Memorial Hospital in Henley closed after just three days because the owner failed to sign a contract.

Jan Wilson opened the Coffee Bean on the ground floor of the hospital, behind the children’s play area, on Thursday last week.

The former nurse thought she had agreed terms with the landlord, ASC Henley, but NHS Property Services said a deal has not been finalised.

Now Ms Wilson, 65, from Mapledurham, is in negotiations and hopes to re-open the café as soon as possible.

She said: “I thought everything was sorted out. I have been talking with them for quite some time and I understood that everything was hunky dory. We had not signed a contract but we had agreed terms.

“There was nothing malicious about it, it was just a misunderstanding. I am not sure where the confusion has come from.

“The landlord has been very sympathetic and hopefully we will be open again soon.”

The Coffee Bean was serving cakes and crisps, salad, sandwiches, jacket potatoes and soup and the selection of food was praised by patients and staff, who said they would visit regularly.

Ms Wilson, who is originally from Yorkshire, was a nurse for more than 20 years before she moved south.

She used to provide food for Mapledurham House and previously ran the halfway hut at the Club at Mapledurham’s golf course.

She had the idea for the café 18 months ago while visiting a long-term friend who had been admitted to Townlands as an emergency.

Ms Wilson said: “The staff were very friendly and offered us coffee whenever possible but I thought, ‘this is really what they could do with’. If people needed coffee then it would just be from the staff canteen or they would have to walk into Henley.

“I have had lots of discussions with the hospital since I first had the idea. I wanted to get started as soon as I got the ‘yes’. I have had lots of nice feedback. People who have had something to eat have said how nice it is.

“We do have loyalty cards but they are mainly for the staff. If people are regularly filling up their cards then that means they are probably spending too much time at the hospital!”

Mrs Wilson said that once the café was established she hoped to have collection pots at the till to help raise money for the hospital. “I am a very big supporter of the NHS as it has given me a living and I suppose this is my way of putting something back in,” she said.

“It has always looked after me and the people that I care about and I care about Henley. I am really excited about it. It is a great opportunity for me.”

An NHS Property Services spokesman said: “Currently, the operator has not agreed to the landlord’s terms of the lease, or signed an agreement.

“Our local team are due to meet Ms Wilson as soon as possible to help to progress the lease.

“We hope to see the Coffee Bean at Townlands Memorial Hospital open soon and serving patients, staff and the public.”