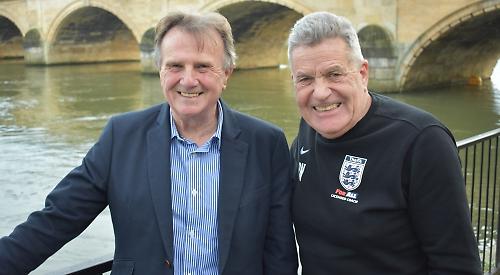 Peter North, who lives in Sonning Common, was unanimously selected by the club’s committee at a meeting at the end of last month.

North has also been made head of coaching and development, a move that has been welcomed by Dieter Hinke, the club’s chairman.

Hinke said: “His ambition and the way he talks about football are very similar to mine. We gelled straight away over quite a few things.

“It is important that everybody is singing from the same hymn sheet. We have never had a head coach before, so it is a new venture for us, but we want to be ambitious.”

North said: “With the potential the club has and the players and facilities it has, it should really be playing in a higher league.

“This will be the ambition of Dieter, myself and the managers and coaches to endeavour to achieve this. I want to move the club forward on and off the field. I want to make sure we are working hard to get the best out of people.”

North joins Henley Town with a wealth of experience both as a coach and a manager.

The 75-year-old played semi-professional football until he was 42 years old for Rickmansworth Town and started coaching youth football in 1979. He is a Level 3 qualified coach and has worked professionally with Torquay United, Arsenal and most recently Exeter City.

He coached a Watford legends side against Arsenal in a charity match in 2013 and was named community coach of the year at the Devon Sports Awards in 2014.

North moved to Sonning Common last year with his wife Jacqueline to care for his father-in-law. They got married in 1996 at Phyllis Court and have four children, Jason, Tyrone, Adam and Amy.

Hinke, of Elizabeth Road, Henley, is a former town councillor and started his role as chairman last summer.

He is encouraging more players to join the club and believes Henley Town has the facilities to help young footballers thrive.

Hinke added: “We would really like to get the message out there that you can still get very good coaching and play a high standard of football at Henley.

“We are a community club and it should be natural that the players who are in the youth teams come to us for the next stage of their football development.

“We don’t have targets. We just want to monitor our financial stability. In previous years, the club couldn’t financially support itself, so our ambitions have to match our finances. We want to develop within our means.”

Henley Town is the oldest football club recognised by the Oxfordshire Football Association and next year it will be celebrating its 150th anniversary.