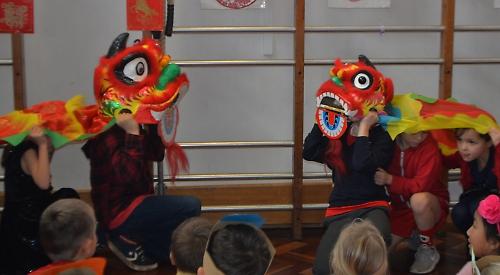 PUPILS at Trinity Primary School in Henley performed for their parents during a special assembly to mark Chinese new year.

Children in years one and two spent two weeks studying Chinese culture for the performance.

They retold the Great Race, which featured the 12 animals of the Chinese zodiac, and wore hats with different animals on.

The children then took it in turns to come to the front of the school hall and demonstrate what they had learned. Some showed off their Chinese artwork, which included paper lanterns, fire-breathing dragons made from egg boxes, origami animals and Chinese calligraphy. There was also a traditional dragon dance.

Michaela Evans, year one and two teacher, said: “Our Chinese teacher Shuorui Wang has been teaching the children about her culture. She did Chinese writing of all the children’s names and they had a go at writing their own.”

The assembly ended with a song to wish the audience a happy new year.