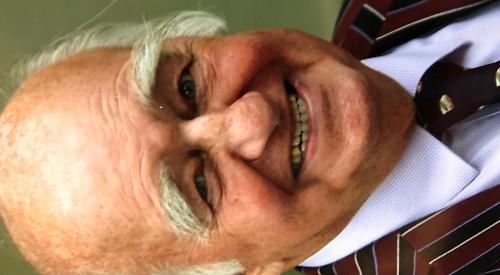 BOB DE BOARD, who died on February 4, aged 87, after a short illness, was a well-known and prominent member of the Henley community, an academic lecturer, successful author and published poet.

He was born in Brislington, a suburb of Bristol, educated at Bristol Grammar School and, after National Service, went up to Cambridge.

Bristol was blitzed in November 1940 and frequently bombed, so Bob, with many of his classmates, was evacuated and lived in Cornwall for two years of his school days and only returned to Bristol once the danger had passed.

His time in Cornwall, especially the area around the fishing towns of Fowey and Polruan, gave him an abiding interest in the Cornish coast and a constant desire to return.

It also sparked a lifelong interest in the works of the writer Kenneth Grahame, who had been married from the Fowey Hotel.

After National Service with the Gloucestershire Regiment, which was spent mostly on secondment to the West African Frontier Force in Nigeria, Bob returned to England and went up to Selwyn College, Cambridge, in 1952.

While at Cambridge his college was introduced to the nearby Homerton ladies’ college, where he met Mary, who was training to be a teacher.

After both graduated, Bob and Mary were married in 1957. They went on to enjoy a happy marriage for nearly 50 years.

Bob left Cambridge and continued his studies at the ecclesiastical college in Chichester, with an initial posting as industrial chaplain to the Bishop of Wakefield.

Following his ordination, the couple moved to Huddersfield, where he was appointed curate, then vicar, of Huddersfield Parish Church. His career then took a secular turn with appointments to Pressed Steel Fisher in Oxford and finally to Henley Management College with a move to Henley for the whole family, by then consisting of Bob and Mary and their children Nicholas and Louise.

Bob’s move into academia gave him time and motivation to write three textbooks on organisational psychology.

His most successful book is Counselling for Toads: A Psychological Adventure, which to date has sold more than 120,000 copies and has been translated into six languages.

The book, which encompassed his lectures on the subject of counselling at Henley Management College, followed on from Grahame’s Wind in the Willows and became a primer for both those studying counselling and those teaching it as a subject.

The author takes the characters from Wind in the Willows — Badger, Mole and Ratty — and introduces a new character, Heron, a counsellor and a thin disguise for the author himself.

Heron’s role in the book is to get the animals of the riverbank to help their unfortunate friend Toad to face up to his depression.

So successful has the book been that it is still in print more than 20 years after its publication in 1997 and was most recently the subject of a question on University Challenge.

Bob took an active part in the business and social life of Henley.

He joined the Rotary Club of Henley Bridge in 1984 soon after it was formed and served as president twice in the next 30 years.

After Rotary, he moved on to Probus, the club for retired business and professional leaders, and was president of Henley Probus Club from 2011 to 2014.

Bob was always a lover of the river, its creatures fictional and real, beginning with the Avon in Bristol where he learned to canoe with the sea scouts, and later the Thames, where he owned a narrowboat for many years.

Even as his health declined he would enjoy a riverbank stroll with his cairn terrier, Boris, usually on the towpath between Remenham and Leander.

He is survived by his daughter, Louise, his many friends and colleagues and a legion of readers of his books, followers of Mr Toad and Heron — in Henley and beyond.