Rolex belonging to wartime pilot on way to descendants 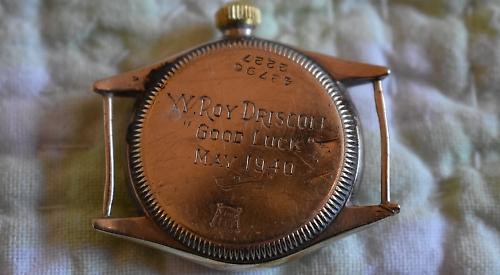 A GOLD Rolex watch belonging to a pilot who died after crashing in Shiplake 80 years ago could soon be reunited with his descendants.

Metal detectorist Brian Fearn found the timepiece, which dates from the Thirties, in January while searching a field in the village with four friends from the Oxon Treasure Hunters.

The front of the watch was missing but the back had an inscription reading: “W Roy Driscoll. Good luck. May 1940.”

Mr Fearn discovered that a William Roy Driscoll served in the RAF Volunteer Reserve as a leading aircraftman and was a pilot under training based at RAF White Waltham.

Both he and his instructor, Sergeant Jack Philip Smith, were killed when the Tiger Moth went down on July 28, 1940.

Mr Driscoll, the son of Robert Alfred and Bertha Driscoll, is buried in Hove Cemetery in Sussex. Mr Fearn’s friend and fellow treasure hunter William Engbers, also from Henley, managed to trace the family tree via the Ancestry website, where he left a message for a relative in Australia.

They passed on the news to Terry Driscoll, the son of Roy’s elder brother who lives in this country. The family know only that Mr Driscoll had died in a plane crash at Shiplake.

Now the detectorists hope to reunite them with the watch, which Henley jeweller David Rodger Sharp has offered to refurbish.

Mr Fearn said: “The family were really happy that we found his watch, absolutely over the moon about it.”

Mr Engbers said he had discovered that Mr Driscoll worked as a manager at Kennards department store, which had branches in Croydon and Wimbledon.

He also obtained details of the crash from the National Archives at Kew, which he forwarded on to the family.

He said: “It was very interesting doing it and it’s nice to get a result. Terry sent me a picture through of Roy, so it’s good to put a face to the watch. It will be great to give it back to them.”

Mr Fearn had been detecting for less than half an hour when he discovered the watch buried under about four inches of mud.

At the time, he said: “I looked at it, cleaned off the mud and thought I’d picked up some girl’s watch because it is quite small. I didn’t know it was gold until my mate mentioned that gold doesn’t tarnish.

“When I got back home my friend sent me some links on how to get your Rolex repaired and I noticed it had the crown and the Rolex stamp on it and it’s nine carat gold.

“I thought ‘this belongs to someone and I would like to give it back’. It’s in a state but it can be fixed. It’s going to be worth a lot in sentimental value if that’s your grandad.”

Mr Fearn, a former Henley firefighter who now works as a painter and decorator, said the watch was one of his best finds since he took up metal detecting last year.

“Every metal detector wants to find gold,” he said.