Boat festival cancelled due to pandemic 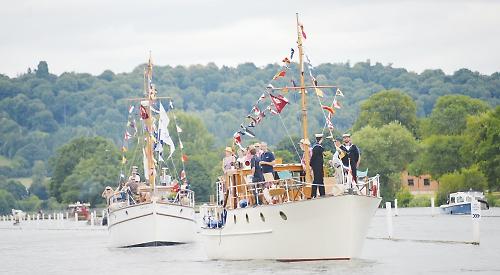 THE organisers of the Thames Traditional Boat Festival have finally decided to cancel this year’s event because of the coronavirus crisis.

The 42nd annual rally of vintage boats was scheduled to take place at Fawley Meadows from Friday to Sunday, July 17 to 19.

Despite most other large events, including Henley Royal Regatta and the Henley Festival, being cancelled or postponed, the “Trad” was still scheduled to take place, depending on the Government lifting its lockdown and social distancing measures.

But now the festival committee, led by co-chairs Lady McAlpine and Adam Toop, have said the length of time for the restrictions to be eased  meant the event could not go ahead.

In a letter to members and supporters, it said: “From the outset of these very difficult and fast-evolving times, the committee of the Thames Traditional Boat Festival took the decision to evaluate carefully and sensitively all possible options that might allow the festival to be held in some form this year and not to cancel until we really believed there was no alternative action available to us.

“While the cancellation of the Henley Royal Regatta provided new and expensive challenges, with stored bulky regatta infrastructure and heavy equipment blocking crucial sections of the Upper Meadows site, it is the extended timetable that we are now seeing applied to the easing of restrictions that ultimately stands in the way of us being able to hold the festival this year.”

The committee said it had “no option” but to cancel with “heavy hearts”.

The letter added: “The Thames Traditional Boat Festival is a hugely popular feature in the summer calendar, drawing visitors from around the globe while supporting so many local businesses.

“The small committee works hard from the close of each Trad to make the following year’s event as perfect as possible, and we were very excited about the event we were offering this year.

“We considered arranging a casual one-day get-together on the site later in the year but even this now looks beset by ongoing restrictions.” The committee said it would refund money paid to the festival if members and supporters wanted, adding: “Some have already generously pledged their advance payments as donations towards the staging of the 2021 Trad in anticipation of cancellation this year.

“The Thames Traditional Boat Festival remains a not- for-profit event with the ultimate aim of assisting young people to take up boat-building apprenticeships.

“It is run by volunteers, including the committee, which is committed to welcoming everyone back to Fawley Meadows next year.”

About 15,000 people attended last year’s festival, lining the banks of the Thames to watch around 150 boats on display, including iconic steamers.

The row barge Gloriana, which was privately commissioned to celebrate the Queen’s diamond jubilee in 2012, performed several row-pasts over the three days.

The Dunkirk Little Ships, which are a regular at the festival, were supposed to mark the 80th anniversary of the evacuation this year.