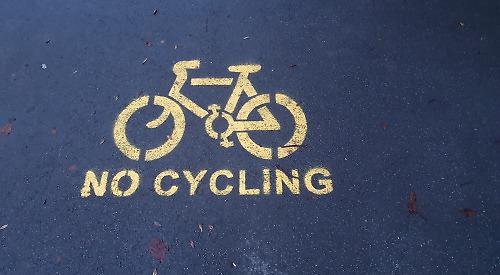 CYCLISTS are no longer barred from riding on the towpath through Mill and Marsh Meadows in Henley.

The town council, which introduced a ban following a row between a cyclist and a member of its parks services team in the summer, has now softened its stance.

Instead it will put up signs explaining that cyclists should ride responsibly and give pedestrians the right of way.

Members of the council’s recreation and amenities committee agreed that enforcing the ban was impractical and encouraging good behaviour was more realistic.

In a report to the committee, estates manager Becky Walker and parks manager Karl Bishop said: “The recent increase in complaints about cycling may be temporary, brought about by government restrictions due to covid-19 and more people out exercising.

“If it’s accepted that it’s beyond the council’s resources to prevent cycling on the footpath, the pragmatic option is to discourage cycling through the use of signage while continuing to monitor the situation. While acknowledging the health benefits of cycling and the desirability of a safe route between Henley and Shiplake, shared use can cause conflict on what is primarily a walking route… cycling should continue to be discouraged.”

Councillor Laurence Plant said: “I’m a really keen cyclist and I think the two groups can co-exist apart from a few who are ill-mannered and lacking respect for others. There’s the odd issue but most of the time things flow seamlessly. We don’t want to explicitly encourage people to come and cycle here but we should encourage good behaviour in those who do.”

Councillor Sarah Miller said: “We’ve always had a few cyclists along there but it has only got worse recently. They don’t always sound their bells and I’ve almost been knocked in the river.”

Councillor Glen Lambert said: “It’s not our place to encourage or discourage cycling so I don’t like the idea of being either a ‘friend’ or an ‘enemy’. I have sympathy with cyclists as there’s a lack or provision for them and I would support creating more routes.” Councillor David Eggleton asked whether the council would be liable if there was an accident but town clerk Sheridan Smith said this was doubtful.Councillor Ian Clark asked whether the towpath could be divided with a special section for cyclists but was told it wasn’t wide enough.

The committee will also ask the council’s transport strategy group to look into new cycle paths elsewhere, possible along Reading Road towards Shiplake.

Cyclists may ride across the grass in Mill and Marsh Meadows but the parks services team said a formal route would spoil their “natural feel”.

The towpath is for pedestrians only but riding a bike isn’t a criminal offence and can only be tackled through injunctions against individuals or private claims for damages.

The report said the path could be designated a bridleway but would then have to be deemed suitable for horses by Oxfordshire County Council, the highways authority.

The ban was brought in after a member of the parks team was struck by a cyclist who then punched him in the face after coming off his machine. Temporary “no cycling” warnings were chalked on the path.