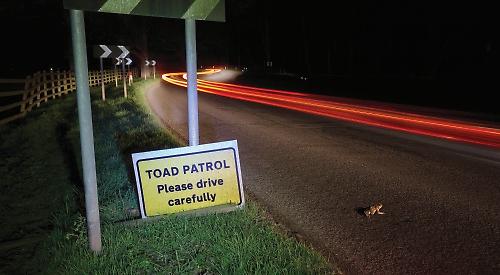 THOUSANDS of amphibians have been helped across a busy road by the Henley Toad Patrol so far this year.

The volunteers are overseeing the mass migration of toads from the Culden Faw Estate to the other side of of the A4155 Marlow Road to a pond where they spawn.

A temporary plastic barrier has been erected alongside the road to catch the creatures.

Professor John Sumpter, a member of the patrol, said the last week had been busy.

He explained: “Just over 1,000 toads have been taken to their spawning pond. Most of these amphibians were collected on the night of March 18, when the weather was ideal for them — it was mild and wet.

“On that night, 674 toads ready to spawn were helped across the road and in addition 161 toads that had already spawned and were now returning home were helped back across in the other direction.

“Some of these returners were probably helped across the road in both directions by the same volunteer. On the other nights of last week the weather was too chilly and dry for amphibians to be on the move in decent numbers, although some toads were collected every night.”

Toads and other amphibians prefer to move on wet and mild nights and can cover 50m in a night.

Only two volunteers are present at the same time to comply with coronavirus restrictions.

The number of toads is around the average for the last 20 years when the partrol has been iperating.

Prof Sumpter added: “Usually spawning migration is tailing off by now and has ended by the end of the month. But occasionally, if it has been a relatively cold start to the year, good numbers of toads are still collected by volunteers in April.

“It is impossible to estimate what the final toad tally is likely to be. A couple of mild, wet evenings are needed to encourage the latecomers to get a move on. There are still a few thousand toads currently in the spawning pond that, once they have completed spawning, would probably benefit from a free lift back.”