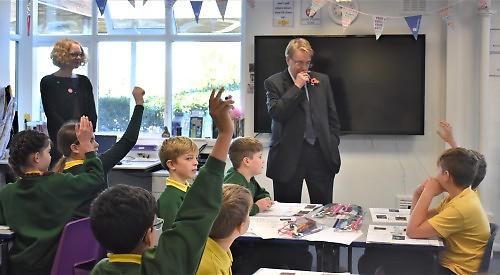 CHILDREN at a Henley school learned about Parliament with a visit from John Howell.

The Henley MP visited Valley Road primary to talk to year six pupils about the role of MPs, how laws are made and the relationship between the House of Commons and House of Lords.

He also talked about private members’ bills and the role of the Lord Chancellor and answered the children’s questions about government, his job as an MP and as leader of the UK Delegation to the Parliamentary Assembly of the Council of Europe.

Mr Howell said: “On TV you usually see people debating and shouting in the House of Commons but most of the time the tone of the meetings is very quiet — there might be disagreement among members but there is definitely not as much shouting.

“My favourite thing about being an MP is looking after people in the constituency. Part of my job is in Westminster and part of it is here in this constituency, which is a very big one. I was a county councillor before I became an MP and that was an interesting time.

“I’d always wanted to become a Member of Parliament; I think every MP has an idea of how to improve life in their constituency and that is what I wanted to do.”

Asked what his top priorities were, Mr Howell said: “My main priority is fighting climate change. I think that is really important and something we can all play a part in.

“My second priority is justice — we have a justice system we can really be proud of and I’m keen to ensure that justice is built into everything we do.”

Speaking after the visit, Mr Howell said: “It was clear the children had done a lot of work and I was very pleased to be able to explore some topics with them using my own experience.

“I do a lot of school visits and usually get a lot of good questions. If that is the level of knowledge that year six have, it suggests we have a very good group of people who will lead the country in the future.”

Teacher Caroline Lock said: “I’m so grateful Mr Howell could join us. He really helped us understand how Parliament and voting works.

“It’s important that the children understand the role of Parliament and that they have a voice and how to use it in the right way.

“There were some very insightful questions which showed that children can delve a lot deeper than adults sometimes.”

Rebecca Parker, 10, said: “It was really cool. We didn’t get many visitors for a long time because of covid and that made this even more interesting.”

Jeremy Pickford, 10, said: “I enjoyed learning about how Parliament works and about what made Mr Howell want to become an MP.”