My mum in Kyiv relies on volunteers 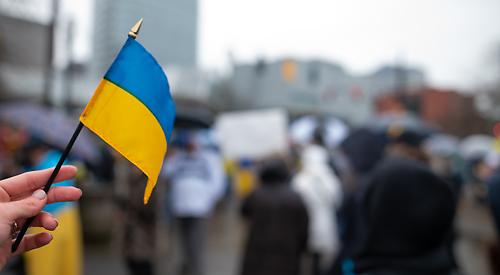 A WOMAN from Lower Assendon has told how her elderly mother is trapped in a block of flats in Kyiv relying on the help of volunteers.

Natalie Johnson says that 84-year-old Iryna Bozhko lives on her own on the 10th floor of a 28-storey block and cannot leave because she has kidney problems.

She has been sleeping on the toilet floor to keep away from the windows in case they are smashed in attacks by Russian forces.

Mrs Johnson, who calls almost hourly to check on her mother, says that she is registered as vulnerable so volunteers check on her.

She said: “My dear mother is still there but all her friends and relatives have now left so she is now absolutely on her own.

“She is still sleeping on the floor and still hiding from the windows in case they are smashed.

“Her friend who was checking up on her regularly has now left the city but every evening at 7pm volunteers send her some hot food, such as soup. The volunteers make the meals at home and deliver them.

“They also make food for the soldiers and send things such as sandwiches to the front line. It really is touching how the people of Ukraine are helping each other.

“My mother still doesn’t want to move and, if she did, it would be quite dangerous to do so and she feels safer where she is.

“I don’t think she is as positive as she has been about her situation now but she still thinks that Ukraine will win.

“I do hope that the war can end soon but who really knows what will happen? Russia are relocating their troops but I don’t think it’s true that they plan to withdraw. Who knows what is in their mind?”

Mrs Johnson runs an online shop for women’s cuff-links and an award-winning bed and breakfast in Lower Assendon.

She was born in Sweden but moved to Kyiv with her family when she was five. She left Ukraine when she was 19 and got married but still considers it her “home”.