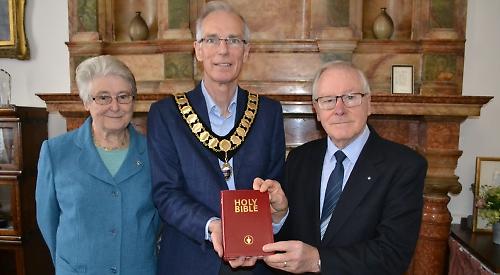 Henley Mayor Julian Brookes was presented with a personalised bible by two former residents. Chris and June Pritchett, members of the Reading Gideons Branch, gave the leatherbound copy with gold gilt to Cllr Brookes at the town hall on Thursday last week.

Mr and Mrs Pritchett used to live in St Andrew’s Road but moved to Calcot last year to be closer to their church. Cllr Brookes said: “It’s a beautiful book, which I’ve been told to keep at home rather than the council offices.” The Gideons  hand out bibles at hotels, hospitals and universities.