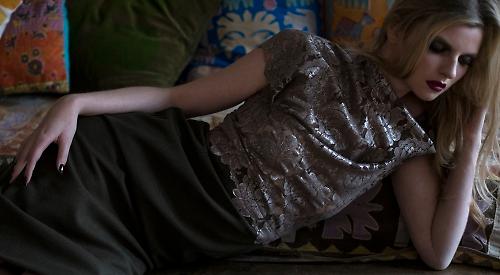 A FASHION designer is devastated after raiders stole £20,000 of her stock just days before she is due to give birth.

Arzu Kara’s entire 170-piece collection, about 10 couture dresses and jackets as well as her wedding dress, which she made herself, were taken in the burglary at her workshop at the Henley Business Centre in Newtown Road on Monday evening.

Her iMac desktop computer, which had all her work stored on it, a sample collection and some jewellery were also taken.

The offenders, who broke in not long after she had left work, forced open a side door and escaped despite triggering the alarm. It’s thought they had a vehicle.

Mrs Kara, who is expecting her first child with husband Hora Tevfik on Monday, said: “To be almost 40 weeks pregnant and having worked incredibly hard to survive in the fashion business, then have this happen to you… I feel violated.

“You’re supposed to enjoy your new baby, not deal with something like this.

“My insurance is not going to cover it because so they have left me dry completely. I’m self-employed, a sole trader, so it’s not like I can find cover.

“They just took my livelihood — all the work on my computer. I don’t know what I’m going to do.

“I’m not a massive business, I’m a designer trying to do better and they have done this to me. I don’t think they care. I think they are very unkind.”

Mrs Kara, 35, was working late at and didn’t leave the workshop until about 6.50pm.

She drove home to Wokingham but at about 8.45pm she received a call from Richard Wood, who also works in the building and is a keyholder and had been called after the alarm was set off.

“He said, ‘darling, I’m in your office and you have been broken into’,” said Mrs Kara. “I said, ‘what?’ and he replied, ‘I’m serious’. He said it was like a bomb site. He said my computer had gone, all my stock had gone. I kept waiting for him to say it was a joke because they joke with me for being so pregnant and still being at work.”

She came back to Henley with her husband and went the workshop to find empty drawers and rails and fabrics strewn across the floor.

Mrs Kara said: “I couldn’t believe it because they had even taken the velvet hangers with my name on them. I was gobsmacked. I thought, ‘why would they target my clothes?’”

The collection included jackets, cardigans, dresses, shirts and jumpsuits and about nine pieces from a sample collection for next spring and summer made only recently.

Mrs Kara said: “No one had seen it. We had done a photoshoot only two months ago. The collection has gone and that means remaking the patterns.

“I made my own wedding dress, which I loved and was keeping, and they took that as well.”

The thieves also stole an unfinished bespoke dress, worth £700, which she been working on for a client and was due to be collected yesterday (Thursday).

He said: “There are muddy footprints all over the floor and you have a picture in your mind of them throwing everything around, not caring about anything but their own personal gain.

“They’ll probably sell it for next to nothing for some food or drink.

“Looking at Arzu’s face on Tuesday morning was pretty sad. She was looking into space, in shock really, just traumatised.”

Mrs Kara, who is originally from Istanbul, has been based at the workshop since 2007 and used to live in Rotherfield Road with her husband.

She said: “I won’t give up. My clientele how hard I work and how much I love my job.

“The clothes are so recognisable that I want people to come forward if they see them. I’m just hoping they will be found and someone will alert us because they are unique.”

Police are investigating the break-in and plan to check CCTV footage at nearby businesses.

It’s believed the raiders used a to force open the side door. A forensics officer was on scene on Tuesday dusting for fingerprints and the side alley had been cordoned off.

Mr Wood, who works for furniture agents R&M, said he was called by the alarm company at about , saying it had been activated at 7.50pm.

He drove to the workshop from his home in Bourne End to discover the break-in and then called the police.

“I looked at the side door and clearly it had been forced open,” he said. “Inside it looked like a mess.”

Mr Wood said raid could have been planned as the alarm for the front door had been set off at about 7.25pm on Sunday night without explanation.

Rob Galloway, who works for floorplans firm on the first floor of the business centre, was still in the office on Monday evening when he heard “banging” downstairs.

He said he assumed it was the cleaners but also recalled hearing a car outside which later sped off. He left the office at about 7.35pm but didn’t notice anything.

Mr Galloway said: “I’ve been working here for 18 years and haven’t had an incident like that previously that I’m aware of. There’s always a risk in an office block but this is quite safe and secure.”

Anyone with information should call the police on 101.