Thousands expected in town for festival 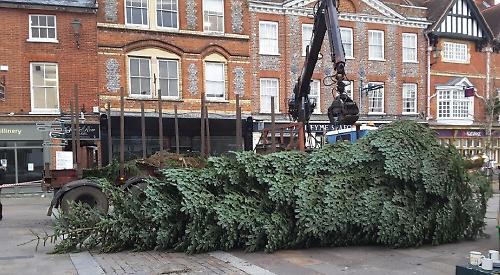 THOUSANDS of people are expected in Henley town centre tonight (Friday) for the annual Christmas Festival.

The streets will be filled with fairground rides and stalls selling crafts, gifts and food and drink.

The festival will be opened at 5pm by town crier Ian Beyts. This will be followed by a children’s lantern parade with pupils from local primary schools.

Father Christmas will lead the youngsters around the town centre, finishing at the town hall steps in Market Place before he moves to his grotto at King’s Arms Barn. Henley Mayor Julian Brookes will switch on the lights on the Christmas tree with Poppy Skidmore, 11, who won the competition to design his Christmas card, and a representative from Invesco Perpetual, which paid for the tree.

The 29ft Nordmann fir was supplied by the Tree Barn in Christmas Common and erected last week.

After the lights have been switched on there will be carol singing on the town hall steps with the accompaniment of the Marlow Town Band.

Choirs from Henley Baptist Church and Gillotts School will lead the singing.

There will be a Henley in Bloom “wishing tree” outside Santa’s grotto where children can write a festive wish and hang it on a branch.

Many shops will stay open until about 9pm, when the event is scheduled to finish.

Councillor Brookes said: “I am looking forward to the whole celebration because there are so many things going on.

“I am particularly looking forward to the lantern parade and switching on the lights.

“It’s very much a family event and a chance for people to enjoy themselves.”

The evening will also include the second night of the Henley Living Advent Calendar, with a performance in Friday Street at 6.15pm. On Saturday, a wreath-making workshop will be held at the town hall from 5pm to 6.30pm.

It will be run by Annette March, of the White Gdn florists in Hart Street.

Tickets cost £35 which includes festive refreshments and all materials. To book, call (01491) 576982 or email enquiries@henleytowncouncil.
gov.uk

On Sunday the annual Santa Fun Run to raise money for the Mayor’s charities will take place.

Cllr Brookes is supporting youth and community project Nomad, Henley YMCA and Riverside Counselling Service during his year of office. Runners will assemble in the Mill Meadows car park at 10am and will be given a Santa hat to wear during the two-mile run.

Prizes will be awarded to the fastest runner under 14 and the best-dressed family, adult, under 10 and team.

The Mayor said: “I’m going to wave the runners off at the start and then greet everyone at the finish.”

Mince pies and hot chocolate will be provided at the finish.

Parking charges in the car park will be suspended.