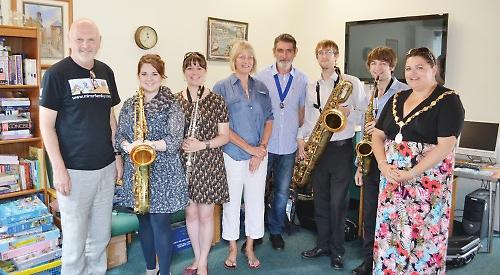 The Kaleidoscope Saxophone Quartet performed at the club’s centre in Greys Road on Friday, the same night they performed at Henley Festival.

It was organised by the festival’s artistic director Stewart Collins as part of the event’s charitable work in the town.

The act, who work alongside the Live Music Now initiative to give people chance to hear music in their community, played songs by Gershwin, Greig and Ellington as well traditional and modern jazz.

It was the second time the club has hosted an act from the festival, as last year pianist Ben Walters, from Dorset, performed.

Gill Dodds, chairwoman of trustees of the club, thanked the festival, who also paid for a lunch for the group’s members.

She said: “The festival has a chairitable arm and last year they offered to do a live performance.  They pay for a group to come here then provide lunch for 50 members. Last year was a great success and Stewart promised to come back again and he has been good to his word.

“As soon as we put the list up it started filling up with people wanting to come straight away. As our membership gets older it’s better to have entertainment here rather than take them out.”

The members of the quartet all play different types of saxophone — Guy Passey (alto), Jenni Watson (tenor), Alastair Penman (baritone) and Sally MacTaggart (soprano). Other attendees of the event were Henley Mayor Kellie Hinton and her consort Councillor David Eggleton.

Mr Collins said: “Part of the wider role of Henley Festival is the things we do to be part of the community. It was a lovely event last year and it gives us a chance to get musicians with real expertise to work with all sorts of groups.

“The Kaleidoscope Saxophone Quartet particularly enjoy doing outreach work with performances so it was a great fit and a pleasure to do as part of the work of the festival.”