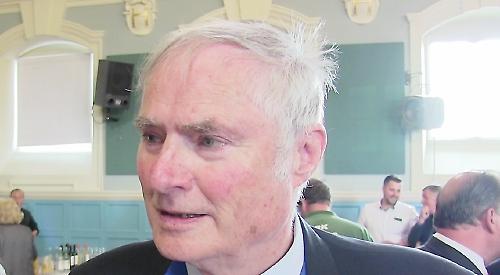 THE former chairman of the Henley Regatta for the Disabled has died, aged 84.

Michael Pooley, who lived with his wife Jackie in Broadplat and had two adult children, Lawrence and Emma, passed away on Monday after a six-year battle with lymphoma.

Mr Pooley received the Henley town medal for his voluntary work in 2014.

Lucy Bowley, who succeeded him as regatta chairman, said he was involved from the start of the event, which is held annually at Phyllis Court Club, in 2010

She said: “He went from doing the land events to being chairman to being a fundraiser and his links to the Rotary club enabled us to buy a boat last year.

“He was incredibly hard-working and a real gentleman. He was a really great guy and he’s going to leave a big hole. He was great at meetings — he was funny and generous — and we will honour him in some way next year.”

Philip Fletcher, secretary of Henley Rotary Club, said: “I’d known Mike for easily 25 years, probably more, and we became special friends. Ours wives share the same birthday and my birthday is two days before his so every year we’d have a big birthday bash.

“We always got together at least once every year and had a meal and we became very good friends through our Rotary clubs.

“He was a really lovely man and did so much for the community. When he was awarded the town medal it was very well deserved.

“I will miss him — I can’t imagine anyone having a bad word to say about him.”

Mr Pooley had been a volunteer with the visually impaired group since 2003 and become chairman in 2009.

Nicky Emms, another long-standing volunteer with the group, said: “Mike will be remembered with fondness by the many members of the Henley Visually Impaired Group whom he helped and entertained for many years.

“He and his small team of helpers arranged monthly meetings. The members enjoyed afternoon tea, a quiz and various entertainments, plus the occasional outing and boat trips on Rivertime.

“The highlight of the year was the club Christmas lunch when everyone received a present and sang carols with the Henley Singers. Mike worked tirelessly to arrange interesting meetings and welcomed each member with a smile and kind words. He was loved by many and will be sadly missed.”

Annie Lathaen, president of the Rotary Club of Henley Bridge, said: “Mike will be greatly missed.He was a funny, kind and friendly man with a heart of gold and is quite simply irreplaceable.

“He was an outstanding Rotarian and one of the few who received two Paul Harris fellowship awards, which is the highest Rotary honour.

“He organised many events including a fashion show and a Ross Brawn Formula 1 dinner which raised more than £200,000.

“He had also held the office of Commodore of the British Rotary Fleet as boating was one of his major interests.”

She said Badgemore Park Golf Club, where the club meets, was flying its flag at half mast.

Henley MP John Howell, who usually opens the Regatta for the Disabled and commentates on some of the races, said: “I think that the success of the event says everything about the man.

“He went out of his way to make sure that the river was open for everyone. That shows his kindness.”