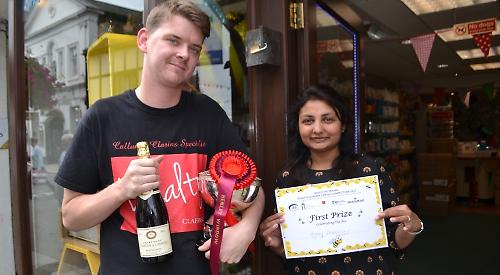 Henley Pharmacy in Bell Street was judged to be the best out of 16 businesses that entered this year’s contest.

The theme was “celebrating the bee” and the displays featured various incarnations of the insect, honeycombs and flowers.

Participating shops had to include in their displays one of 30 bees knitted by 91-year-old Gwynn Anstey, mother of competition organiser Carolyn Molyneux.

Staff at the pharmacy created their display using bee toys and balloons, pots of honey and display shelves in the shape of honeycomb cells.

One of their products, called Burt’s Bees, uses real honey to create hand creams and soaps and was used in the display.

Pharmacist Jemima Hume-Humphreys, who keeps bees, lent some of her equipment for the display.

Shelf assistant Prachi Patel said: “We started thinking about what we should do and realised we had an advantage because we sell a product that is to do with bees and honey.

“Jemima let us use her stuff and it wouldn’t have been such a great display if we hadn’t had that.” This year’s judges were Mayor Kellie Hinton, her escort Councillor David Eggleton, town manager Helen Barnett and competition sponsors Hilary Champion, of financial advisors Milton Gordon & Co, Caleb Southwell, of IBS Office Solutions, and Richard Rodway, of the Head Partnership solicitors.

Councillor Hinton said: “All the displays were fantastic. The winner was educational and every aspect was dressed up, even the A-board. Everyone in the shop brought something in, so it was a great group effort.”

Mrs Molyneux added: “There was a very good standard of entries and everyone put a lot of effort into their windows.” The runner-up was Bluebells florists in Reading Road, while the Sue Ryder store in Duke Street came third and gift shop Stocks, also in Duke Street, was fourth.

Other businesses that entered were Cannelle Beauty and Tiny Gallery in Hart Street, Blue Cross, Oxfam Books, Helen and Douglas House and Cancer Research in Duke Street, Boatique and the Ferret in Friday Street, Candela in Reading Road, Manzana and the Henley Pet Shop in Bell Street and Body Wise in Market Place.

The next window display competition will be held in December with a theme of “Christmas around the world”.