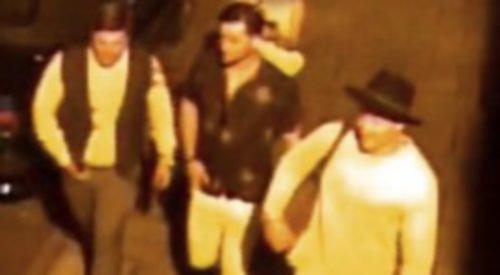 TWO women were raped in the early hours of finals day during this year’s Henley Royal Regatta.

Police are trawling through hours of CCTV footage to try and identify the attackers.

One woman was attacked just outside the town centre between midnight and 2.30am on the Sunday morning after the victim had left the Chinawhite nightclub, off the towpath on the Remenham bank of the Thames.

The woman, who was in her twenties, walked to a car parked near Harspden Road and Reading Road with a group of people she had met at the venue. She was then raped outside the vehicle before three men drove off in it.

A member of the public found her near the Three Horseshoes pub in Reading Road shortly before 2.30am and called the police. Detectives are appealing for witnesses, particularly the drivers and occupants of a dark metallic car which stopped outside the pub to check on the woman’s welfare and another car which also stopped.

The second rape happened in a field near the regatta enclosures, a short distance downstream from Henley Bridge, at about 1am on the same date. Police believe the offender and the female victim knew each other.

No-one has been arrested since the incident was reported last Thursday but investigations are ongoing.

Officers do not believe the attacks are connected.

The Chinawhite enclosure is based at Temple Island Meadows, a riverside plot owned by the Copas Partnership, and run by the London nightclub of the same name. It was open from midday until midnight on the Friday and the Saturday of the regatta, with tickets costing up to £50.

In relation to the town centre rape, Detective Chief Inspector Lis Knight of Oxfordshire CID said: “Incidents of this nature are rare in the area and we are working to establish what happened.

“I would like to ask the public to think back to the early hours of Sunday morning — did you see a woman with a group of white men and a car in a residential street?

“If you have any information, regardless of how insignificant you think it may be, please come forward and speak to officers as this could assist with our investigation.” In a joint statement, Chinawhite and Copas said: “We have been liaising with Thames Valley Police since the morning of regatta Sunday regarding this awful incident, which took place in a residential area of Henley town centre after our venue had closed. We are doing all we can to assist with their enquiries.”

Daniel Grist, the royal regatta secretary, said the committee was working with police to see if their own CCTV cameras could help with the investigation into the Harpsden Road incident. He said he and his colleagues had not been informed of the other.

He said: “The incident took place after our facilities had closed and racing had finished for the day. Chinawhite is not on land owned by Henley Royal Regatta.”

On hearing of the second attack, which police announced on Tuesday, Henley Mayor Kellie Hinton said: “I’m stunned and absolutely gutted. To think that people were being violated in such a disgusting way less than a mile from where I and my daughter were sleeping makes me feel sick.

“Some people are attracted by the London nightclubs and their association with celebrity culture, which brings a horrible element to what is actually a fantastic sporting occasion.”

Henley town councillor David Eggleton is trying to assemble a team of 20 volunteer “street angels” who could patrol a wider area of the town centre every Friday and Saturday night.

He said: “I keep stressing how important it is to have people looking out for vulnerable individuals until well into the early hours — until 3am or beyond. We always think major crimes won’t happen in our little town but there’s always a danger and while we can’t always prevent it, we can deter criminals by having an eye on things.”

The attacks were among 36 recorded incidents during this year’s regatta, a decrease on the 62 reported in 2016. Fifteen people were arrested, less than half of the 32 arrests made last year and the 35 made in 2015.

Up to 150 officers, some of whom were armed with semi-automatic rifles, were on duty during this year's regatta, more than double last year’s number. There were 120 deployed in the town during the racing compared with the previous figure of 60 and numbers increased further on the Saturday night.

The increase was in response to the terrorist attacks that took place in Manchester and London earlier this year. Officers with sniffer dogs were patrolling the riverbank while a high-speed police boat was on the water.

There were also two complaints of people acting in a drunk and disorderly fashion and one reported concern for a vulnerable adult.

Superintendent Nigel Doak, head of criminal justice at Thames Valley Police, said: “This year’s figures do include serious reported offences which are now being thoroughly investigated. I would like to reassure members of the public that we take reports like this very seriously and enquiries are ongoing.“