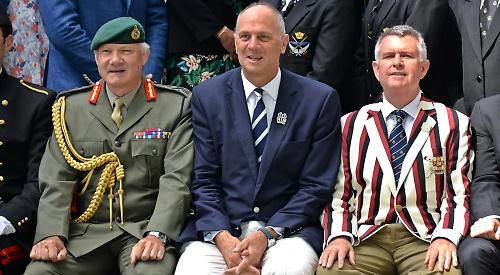 SERVICEMEN and women from eight countries came together to launch a new trophy which they will compete for at this year’s Henley Royal Regatta.

The 120 athletes from Britain, America, Australia, Canada, France, New Zealand, Germany and the Netherlands assembled on the lawn in the Stewards’ Enclosure and were photographed from the air by a drone as they formed the number 100.

This was to mark the centenary of the 1919 Royal Henley Peace Regatta, a four-day competition which was staged to mark the previous year’s Armistice and featured several events for armed forces crews only.

This year’s racing will mark the first time that military men and women have rowed in the same boat at an elite international event and the first military competition at Henley in 100 years.

The drone was operated from a pontoon on the water by camera crews who will be providing aerial footage during this year’s live coverage of the racing. Regatta security staff briefly shut the towpath while the picture was taken.

Participants also took part in a group photo on the jetty in front of the Stewards’ Enclosure flanked by two members of the Coldstream Guards wearing traditional bearskin hats.

The rowers enjoyed lunch on the grandstand while being addressed by regatta chairman Sir Steve Redgrave.

A representative from each group gave a brief introductory talk before the athletes were welcomed by General Sir Gordon Messenger, Britain’s outgoing vice-chief of defence staff, and Chris Hartley, chairman of the King’s Cup organising committee.

The rowers were also given their first glimpse of the new King’s Cup, which is named after one of the awards from the peace regatta which was presented to a winning Australian Army crew by George V.

Crowds gathered on the towpath during the ceremony and took pictures on their phones.

Sir Steve told the rowers: “Henley Royal Regatta and its stewards have been overwhelmed by the amount of work that Chris has put into getting this off the ground.

“The sport of rowing lost so many people who had raced here at Henley before the outbreak of war and clubs around the country erected memorials to those who fell during that conflict.

“It’s an honour to have your generation competing here. To be good enough to row at Henley can take three, four or up to 10 years’ training and when I took the time to watch your crews at the qualifiers I was hugely impressed.

“There was a very high standard and ability on show and I’m sure we’re going to see some great racing from you all. We’re proud to be making history and you can take pride in being a part of it.

“Thank you for everything you do for your countries and for the Henley Royal Regatta. Most importantly of all, I hope you have a great time and a lot of fun.”

Cpl Damien Richardson, of the Australian squad, said: “It’s an honour and a pleasure to be here today.

“As winners of the original King’s Cup, we are looking forward to taking part again and swigging some sweet, sweet champagne over it for the second time!

“It would be unwise to wish all the teams ‘good luck’ but we’re hoping for some good competition. Thank you to all the stewards and let’s have some bloody good racing.”

Capt Oscar Richards, who is captain of the British squad, said their boat had been christened HMS Ark Royal after several Royal Navy vessels of the same name.

The squad is drawn from a range of disciplines across the three forces and between them they have served in Afghanistan, the Middle East and Belize, among other places.

He said: “It’s an honour to represent our squad and our nation. We have been united because of our service and are strong because of our diversity. “We are here as your trusted hosts and are proud to present this colosseum of rowing.”

The other crews laughed when he jokingly shared some “top tips” for racing which were deliberately incorrect.

Capt Richards said: “The umpire is inclined to shout your crew name as encouragement, sometimes adding a flag wave. It is polite at this stage to ignore him and maintain your current course.

“Our stations are conveniently named after their respective counties. Bucks is on the east and Berkshire is on the west — don’t let anyone tell you otherwise. Also, like all other races, the course length is 2,000m so make sure you stop at that point.”

The New Zealand crew introduced themselves with a haka from a Maori rower. Each member then greeted Sir Steve with a Maori greeting in which they pressed the bridge of their noses together.

Officers from the Netherlands led a game challenging people to guess the meaning of Dutch phrases including “now the monkey comes out of his sleeve”, which is said when someone’s hidden motive becomes clear, and “Oh, on that bicycle”, meaning “now I understand”.

The Americans’ head coach Rob Friedrich joked: “It’s fitting that I’m on last — arriving late to the party seems to be a common theme with us, especially in the Second World War.”

Mr Hartley unveiled the new King’ Cup, which features an octagonal base in honour of the eight participating countries, all of which competed in 1919, bar Germany and the Netherlands.

The body features a gold-plated vein representing the River Thames and its tributaries with a single diamond marking Henley’s location.

The “river” was made by melting down and blending eight gifts from each participating country, including a sliver of the old cup from Australia and part of its national war memorial.

The Queen donated a shard of copper roofing from the mausoleum of the Frogmore Estate, a royal residence near Windsor, while Canada gave metal from the roof of its old Parliament building.

France donated four Croix de Guerre medals awarded during each year of the war, Germany gave brass from its Gorch Fock training boat and the Netherlands gave shell casings from the coronation of King Willem-Alexander in 2013.

New Zealand contributed copper fittings from its original 1919 King’s Cup boat and America gave a fitting from the USS Constitution, a frigate commissioned by President George Washington and launched in 1797.

Mr Hartley said: “It is fantastic to see you all here. The purpose of this project was to honour our past as oarsmen were decimated during the war — if you were launching small boats at Gallipoli, they would be first to stick their hands up to row them.

“We also wanted to celebrate our fittest and finest and to empower women in defence as this would never have taken off without the women in your crews.

“Finally, an undeclared objective was to catalyse this sport in your nations and in military crews around the world.

“You will leave here with fantastic memories and, in some cases, some medals and I want you to take that sense of excitement back and share it with others.”

Gen Messenger said: “I extend a very warm welcome from the UK armed forces to the visiting teams and wish you all the very best for the week ahead. I can tell it’s going to be incredible.

“When I was first phoning my counterparts in other countries three years ago I don’t think Chris or I had any idea how successful this would be. It’s no small thing that the King’s Cup has fitted itself into the usual regatta schedule and we thank the stewards for their generosity and flexibility.

“The peace regatta was planned to hasten a return to normality after the war and while some of the original rationale has gone, I’d argue that it’s as important today.

“In times of increasingly parochial politics, where borders and boundaries are hardening rather than softening, it’s incumbent upon us to demonstrate those international links.”

The event, which was filmed as part of the official regatta coverage, concluded with three cheers for the Queen and a minute’s silence in honour of all fallen personnel with a recital of the Last Post and Reveille.

Afterwards, Mr Hartley said: “It was absolutely tremendous. The crews have put an awful lot of effort in and there will be some fantastic racing. It’s brilliant to see how fascinated they are by the new cup — we can’t keep them away from it.”