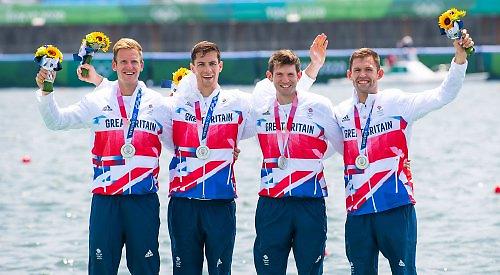 HENLEY Royal Regatta returns after 14 months next week but will not be the same as normal.

Organisers were determined that the event would go ahead — even behind closed doors — after it was cancelled last year due to the coronavirus pandemic.

That was the first time in the regatta’s 182-year history this had happened outside the two world wars.

The five days of rowing will take place almost two months later than normal following the lifting of restrictions on large gatherings.

The number of spectators will still be hugely down and the infrastructure has been changed so there will be no grandstand in the stewards’ enclosure and no regatta enclosure while the boat tent has been moved to the opposite bank to usual.

Spectators will be encouraged to wear masks in all indoor spaces, such as the on-site shops and restaurants.

The measures have been taken to protect the rowers, who will include Team GB’s Olympic silver medallists from Tokyo, visitors, officials and staff.

One other difference is that women in the stewards’ enclosure will be allowed to wear trousers for the first time, provided it is with a jacket.

A total of 481 crews — 41 from overseas — will take part in the regatta, which will begin on Wednesday and end with 26 finals, including three new ones for women, next Sunday.

Sir Steve Redgrave, chairman of the regatta, it was “tremendous” to be able to hold the event, which is one of key dates in the social and sporting calendar.

He said: “It was traumatic last year to have to pull it and it has been a hard 12 months to get to where we are.

“Public health has absolutely been high on the agenda for the whole world, not just us at Henley, but we wanted to stage a regatta for the rowers if we possibly could.

“With the way that things have opened up in the last few weeks, it seems that we have made a good decision to stage it.”

Sir Steve said the smaller number of visitors to the enclosures would impact the regatta’s finances but it was important that it went ahead. He said: “We were prepared to run it behind closed doors with no spectators, which made the planning and structure very different.

“We knew we wanted to put in the full course but this is expensive and to cover our costs we need members and guests to come along. If we don’t get those numbers then we are going to have a financial hit.

“August is holiday season so we know we are not going to get full enclosures but, in some ways, it is about getting back to normal. At this stage we don’t know how many people will come along.”

The regatta enclosure has been re-allocated to members to allow for greater social distancing.

A new enclosure, the Supporters’ Lawn, has been set up where the boat tent next to Leander Club usually is.

The boat tent will be on the other side of the river downstream of Phyllis Court Club to enable the athletes to stay in their own “bubble” as far as possible.

Daniel Grist, chief executive and secretary of the regatta, said it had been a “difficult” 18 months organising the event.

He said: “I have learnt to peel oranges while juggling them but in practical terms we are pleased that everything is going ahead.

“It has been a scramble but we are really grateful to the local community, our members and the rowers to make sure we can get this across the line.

“It may be a little bit different but all of our tentage is new this year. We have invested in tents for the first time rather than hiring them so it will all look cleaner and sharper.

“Some people are disappointed that there is no regatta enclosure this year and they are not able to mingle with the competitors but we are launching a new supporters lawn. There will be a large screen to watch the racing, a shop, bar and catering.

“After deciding early on that we wanted the regatta in Henley, the priority has been about safety of the community and our competitors, which go hand in hand.”

Mr Grist would not reveal the total number of visitors that would be allowed to attend each day, saying: “We don’t want overcrowding.

“We only ever sell up to what we can safely evacuate so the ticket sales are not open-ended.

“The regatta is, by and large, an outside event so we have got very good ventilation and that works in terms of making it less of a risk.

“We have decided to encourage people to wear face masks in enclosed spaces and places such as the lunch tent and and we are trying to reconfigure the entrance and exit of the toilets so we can manage the congestion points. We are doing all these things so we can get as many people in as possible in safety.”

The regatta has been working with its contractor, the Compass Group, to ensure it can cope with all eventualities, including staff needing to self-isolate.

Mr Grist said: “We are trying to make things as easy and safe as possible. We have worked together to reduce slightly the range of things on offer in the bars and elsewhere to make things easier and so they can be run the catering with fewer people and so we can remain flexible on staff that are available on the day.”

Businesses in Henley said they were delighted to have the regatta back as it provides their busiest time of the year and normally attracts tens of thousands of people to the town.

Jonathan Hobbs, managing director of boat hire company Hobbs of Henley, said: “The regatta is integral part of our season and it was badly missed last year.

“There has been a bit of a surge in interest since the covid restrictions eased and the regatta confirmed it was going ahead but people are still a bit cautious.

“We have had a reduced quantity of bookings for the passenger boats but our smaller boats seem to be a success.

“We are just happy to be getting the boats out again and are looking forward to the triple whammy of the regatta, Rewind Festival and the bank holiday together, which are uusally our three biggest weekends.”

Stan Ainslie, chairman of Phyllis Court Club, said it would be staging a Freedom Festival on the Friday, Saturday and Sunday of the regatta to celebrate the lifting of restrictions.

He said: “We have virtually sold out of tickets as people are keen to get back to partying.

“In the past we have had over 2,000 people attend per day during the regatta but we have restricted the number to somewhere over 1,000 and we are encouraging people to wear masks when they are indoors.

“To have the regatta back is a real milestone and our hotel occupancy is huge at the moment. You would struggle to get a room between now and the end of September.”

Grace Leo, owner of Relais Henley, the former Red Lion Hotel, is in the middle of a refurbishment but hopes to have 20 rooms available for the regatta period.

She said: “I am absolutely delighted that the regatta is returning, although I understand it may not be one that is typical compared with previous years.

“To have it back after the last 18 months we have had will be great for the morale and spirit of the town. The regatta draws people together and that’s part of its magic.”

Shaun Dickens, who runs the Bistro at the Boathouse in Station Road, said: “It will be a very different regatta, so I am not expecting this year to break any records this year.

“Having said that, we are still excited and it is a little step in the right direction after so long. My restaurant manager has been with me for nearly two years and he has never worked a regatta.

“It does feel like the town is bouncing back.”

Jon Connell, managing director of Badgemore Park, said: “I am very pleased the regatta is back and we are back to being fully booked.”

Debbie Robinson, who runs Henley Lettings, which provides accommodation for crews, coaches and supporters with host families during the regatta, said 420 athletes and coaches would be looked after in 69 homes.

“We are just as busy, if not busier than we are used to,” she said. “Most of the international ones have pulled out so I about 90 per cent of the crews are from around the UK.”

• The Copas Partnership, which hosts private hospitality enclosures on land off the Thames towpath, will not be operating a car park on Remenham hillside. Its two enclosures will be running at Remenham Farm instead of Temple Island Meadows. The Barn Bar will not be trading and a car park for customers with reservations will take its place.