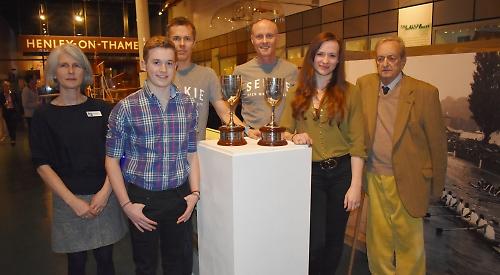 THE winners of last year’s Henley Classic swim have had their names added to two historic trophies.

Henry Plewes and Vicky Cunningham, the male and female winners of the 2.1km upstream swim along the Henley Royal Regatta course in July, were presented with the Ovey and Inman Cups respectively at the River & Rowing Museum in Mill Meadows.

The trophies are named after two organisers of a long-distance race run by Henley Swimming Club in the 1890s, Richard Ovey and George Talfourd Inman.

They were bequeathed to the modern event, which was launched in 2004 by Henley Swim.

The cups are now kept at the museum and presented each year.

Also at the presentation were Henley Swim organisers Jeremy Laming and Tom Kean and Sarah Posey, director of the museum. The names of the winners were engraved on specially made bases for the trophies.

Henry, 15, who lives near Portsmouth, took part in the swim for the first time last year after supporting his brother Rory at previous events.

He said: “I didn’t realise what I’d actually achieved until a couple of weeks later. A few times I thought the race had been cancelled because I was so far ahead. I couldn’t see anyone else around me. I will 100 per cent be coming back this year.”

Miss Cunningham, from Reading, who was also taking part for the first time, said: “It was the fastest I’d ever swum in open water. I’m going to do it again this year.”

Mr Laming added: “The event keeps growing. It seemed to catch the imagination of swimmers everywhere and before we knew it we were inundated.”