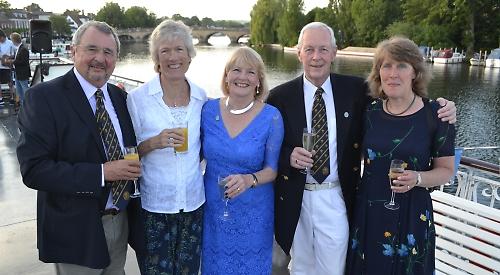 MORE than 90 people enjoyed a trip along the River Thames for the annual Henley Town and Visitors’ Regatta president’s drinks party.

Dr Noel Snell, who was elected president in March, welcomed guests aboard The New Orleans on Friday evening for the regatta’s first social event of the year.

The Hobbs of Henley boat took guests to Marsh Lock, Wargrave and Shiplake in the evening sunshine before returning to its moorings.

Dr Snell, 69, who has been medical officer of both Henley regattas and is a former Mayor of Henley, said: “It went very well. We were so lucky with the weather — it was absolutely perfect. We had well over 90 people and it was lovely up on the deck.”

Folk band Highly Strung, fronted by rowing coach Ian Desmond, performed for the guests and there was a raffle with prizes donated by committee members, including a bottle of champagne, elderflower liquor and smoked salmon.

The proceeds from that and ticket sales will go towards regatta funds.

Dr Snell, who lives in Pishill with his wife Barbara, said he and his committee were looking forward to this year’s regatta, which will be held on July 29. He said: “There will be excellent racing and if we have a lovely sunny day we get crowds down by the river. We don’t charge for people to come into the enclosure.

“It’s the last of the old Thames regattas that tries to keep it going as an Edwardian tradition. We have the enclosures, a straight boomed course for three abreast racing and we give tankards to the winners. We try to keep the standards up.”