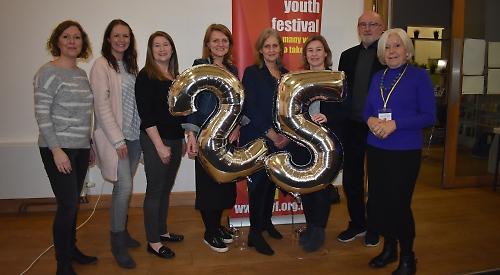 ABOUT 40 people attended the launch of the 25th Henley Youth Festival.

The launch night at the d:two centre last night (Wednesday) was for school representatives and parents to hear what’s going on.

Co-chairwomen Kate Swinburne-Johnson and Jo Dickson announced the theme for this year’s event would be “Celebration”.

The festival marking its silver anniversary and celebrating all the children who have taken part over the years.

Alfie Hay, one of the founders of the festival, said: “The festival was started to celebrate the talents of our children and we want to continue to do that.

“We need teachers in schools to say to students ‘you’re good at that and people would like to see it’.”

An extra night has been added to the event this year, which runs from March 10 to 18, to run a gala night at the Kenton Theatre.

This will celebrate performers through the years, who will step on stage or send videos and messages, as well as showcasing some of this year’s workshops.

Speaking at the event last week, Mrs Swinburne-Johnson said: “It’s amazing the event has been going this long.

“We’re really hoping to inspire everybody in their creative endeavours and giving the opportunity for them to embrace the idea of celebration.”

The festival offers art, music, performance and sporting activities for young people aged from four to 18. It works with schools in Henley and the surrounding area.

Other events include the Go Kids Run, Gig Night at Lovibonds, the Junior Proms at Shiplake College as well as the Senior Proms, Entertain, Sing and Dance evenings will be held at the Kenton in New Street.

Every child in Henley will have the opportunity to take try new activities.

School workshops will again feature heavily this year, offering every child in Henley the opportunity to take part and try new activities.

She said: “I’m delighted to support the youth festival and it’s great it is in its 25th year, which is quite an achievement.”