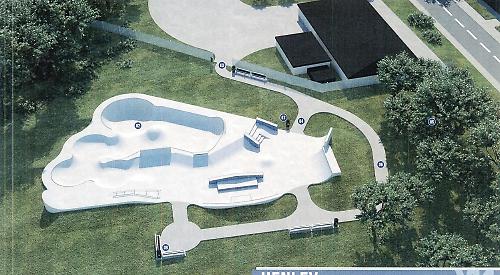 THE construction of Henley’s new £290,000 skate park should begin within weeks.

The town council is expected to give final approval for the “wheeled sports facility” at Makins recreation ground, off Greys Road, later this month.

It is considering appointing a consultant to oversee the construction and installing more CCTV at the site following problems with antisocial behaviour in the area.

Meanwhile, South Oxfordshire District Council has approved minor changes to the design, including repositioning equipment in order to keep soil excavation to a minimum.

It is six years since the idea of replacing the original skate park, built in 2004, was first mooted.

Colin Brathwaite, chairman of the Henley Skatepark Initiative, said: “This has been a mammoth journey. We can now see the finish line thanks to a Herculean effort by our volunteers. It just serves to show that anything is possible with vision, hard work, determination and a rock-solid belief in what you are trying to do.

“This will be a fabulous facility that will serve many people for decades to come.

“The design has evolved from our initial concept design. We’re extremely pleased with the result and feel that it provides something for all abilities and disciplines.”

The skate park will be built by Maverick Industries, of Dorset.

Mr Brathwaite said it was hoped to “put a spade in the ground as soon as possible” after the town council’s meeting on February 14 with a view to skate park opening in the summer.

Last week, the town council’s recreation and amenities committee agreed to consider appointing a construction consultant. Councillor David Nimmo Smith said: “We will need someone to make sure what’s built adheres to current standards and regulations.”

It also agreed to liaise with Thames Valley Police about CCTV surveillance of the area.

There are currently two cameras on the scout hut in the recreation area and Cllr Nimmo Smith said he wasn’t convinced more were needed.

“I’m not quite sure why we need cameras,” he said. “There are skate parks in Sonning Common and Earley that don’t have cameras. They don’t find it necessary, so why do we?

“Why aren’t we considering putting them in other parts of our town?”

The committee agreed to plant trees at the skate park and to install benches and a water tap for cleaning. The council will also look at the cost of installing recycling bins.

The skate park will have sunken concrete obstacles rather than hollow metal ones and will cater for BMX bikers, skateboarders and roller- skaters.

The project has received a £100,000 grant from the district council, a £75,000 grant from both the town council and Sport England and £20,000 from the Thamesfield Youth Association plus almost £6,000 raised by the Initiative.

Mr Brathwaite said they still needed to raise the remaining £15,000 and in the meantime had borrowed this amount so that construction could begin.

Elizabeth Hodgkin, a trustee of the association and a former town councillor, said: “After all these years it is wonderful to think that this time next year there will be an up-to- date, state-of-the-art skate park.

“Congratulations to all those involved who have never stopped dreaming that it would happen. I am full of admiration for their tenacity.

“This is going to be a wonderful facility for the young of Henley and Thamesfield Youth Association is delighted that it has been able to be part of it.”

To make a donation, email info@henleyskatepark.org