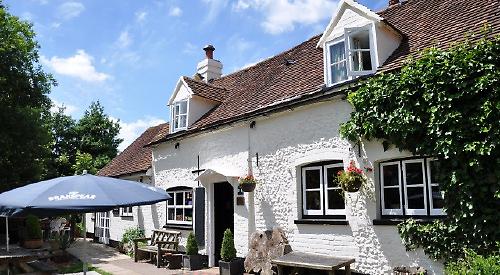 A FORMER casino trainer turned chef is to take over the Rising Sun in Witheridge Hill on Monday.

Kate Makin, 37, is moving into the Brakspear pub with her boyfriend Will Reeve and her two rescue dogs, Floyd and Ada.

They are taking over from Simon and Caroline Pritchard, who have run the business for the last 14 months and are leaving for personal reasons.

Miss Makin has been working as head chef at the Bounty in Bourne End for the last five years and living on a houseboat moored on the Thames outside the pub.

However, she wanted to have a place of her own.

She said: “Originally, I was only doing it to help them out and I have been doing it for five years.

“The only reason I am leaving is because I want to have my own pub. When you are working for someone else, they are the ones who make the decisions and I want to have free rein over things.”

She decided to make a move in the summer when the Bounty’s owners were thinking about selling up.

“It made me think about what I wanted to do,” said Miss Makin. “I started looking around and I knew Brakspear was a great company.”

She went to work at the Bounty after 10 years working in training and recruitment for Grosvenor Casinos in London.

Originally from Guildford, she was raised on a farm and spent her teenage years working in a local pub, the Grantley Arms, gradually working her way up from pot washer to head chef.

She left when she was 21 to study social psychology at the University of Reading and spent around two years travelling in Australia in between two stints with Grosvenor.

Miss Makin said: “I was responsible for seven casinos, including the flagship one on Edgware Road. I was mainly based in the West End though. I loved London and I lived there for a long time but eventually got sick and tired of the big city environment and wanted to get back to my roots, so I left a job that was fairly well-paid and bought a narrowboat.

“It has been a learning curve. I have come back to find my boat has been damaged, or with no power, and that makes you less of a princess and means you have to get your hands dirty.”

She started working at the Bounty with her friends Emma Brinkworth and Damian Wright.

She met Mr Reeve, 34, when he started working behind the bar and now people jokingly call the couple “Kate and William”.

During Miss Makin’s time as head chef, the menu has been expanded and the pub is regularly fully booked for Sunday lunches. At the Rising Sun, Miss Makin says she will stick to what she knows best by focusing on an “all-British” menu featuring local ingredients.

It will include her mother Sandy’s potato salad recipe and her homemade chutneys and pickles.

Miss Makin said: “In the nicest possible way, the Bounty used to be known as a burger and beer pub and now it attracts more families and is known for home-cooked food. Food sales have at least doubled in the time I have been there.

“The Rising Sun has lots of similarities. It is a dog-friendly pub and it is a beautiful building with lots of personality. It is the sort of environment where you can relax.

“I think it will take me back to when I was a child and we were isolated living on the farm. The pub is out of the way but there is also a brilliant community around there.

“Locally, there are good pubs but they are quite upmarket. They are lovely, but not that cheap. I want my pub to be a relaxed, family environment but also somewhere that doesn’t cost an absolute fortune.”

Miss Makin hopes to improve the interior of the pub and has plans for a new children’s play area.

The new tenants will hold a welcome party with drinks and canapés on January 25 from 7pm.