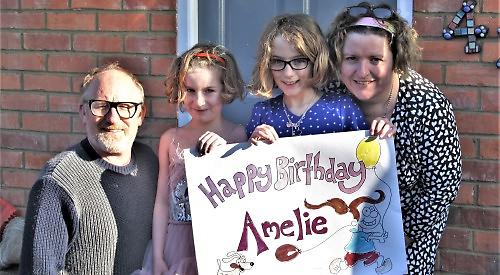 RESIDENTS organised a surprise birthday celebration for a young girl who had to cancel her party because of the coronavirus pandemic, writes James Burton.

Amelie Hepwood’s neighbours decorated their front windows, driveways and cars as well as hedges and lamp-posts in Highmoor Road, Caversham, when she turned eight on Tuesday last week.

Some put up hand-drawn messages and pictures while others strung up balloons and banners.

The youngster had no idea until her parents Sue and Richard, who organised the event, took her and her sister Scarlett, nine, out for a daily walk at 10am, as permitted under the national lockdown.

Pamela Chilvers, a professional pianist who lives opposite, greeted Amelie by playing Happy Birthday and Let It Go, from her favourite film Frozen, on a Steinway grand piano in her front room.

Other neighbours gathered in their driveways to sing along and cheer. Some also left treats and small toys out for her.

Mrs Hepwood, who works for Microsoft in Reading, suggested the idea on a WhatsApp group formed by Highmoor Road residents to support each other through the crisis.

She explained that Amelie, who attends The Heights Primary School in Gosbrook Road, Caversham, was due to celebrate with friends by holding a “silent disco” at a nearby hall and was sad at having to call it off.

Mrs Hepwood said: “People really went to such an effort. I only expected a few houses to put up little A4 notices but there were dozens of signs, banners or messages strung on cut-out letters.

“Amelie was absolutely blown away because she had no idea it was happening. She just thought we were going for a walk and was quite emotional when she saw what everyone had done for her.

“She was sad at cancelling the party because birthdays are a big thing at that age, but she’s old enough to understand there was a good reason behind it so she accepts it.

“We’ve explained very clearly that she won’t be seeing friends but she stays in touch by video call and was telling them all about it. It’s nice that the day still felt special even if the original plan fell through.”

She added: “Before the lockdown, I think a lot of us didn’t have time to get to know our neighbours but it has at least prompted us to make more time for one another.”

Amelie said: “I liked it because it made me feel like we weren’t in the lockdown. It’s really good for people to look after each other at the moment. My favourite part was when the lady played the piano.”

Mrs Chilvers, who has previously played several mini-concerts to entertain neighbours, said: “There’s a lovely community in this street so the WhatsApp group was a natural progression as we all want to help each other out.

“Amelie was a bit shy but she really enjoyed it. Her mum said it was one of the best birthdays she’s had, which is pretty incredible considering the circumstances.”